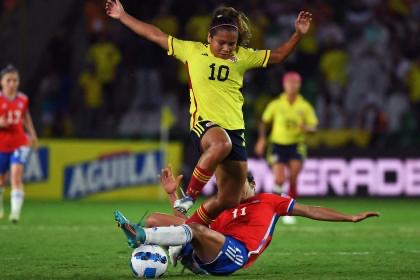 The Colombian National Team defeated Chile 4-0 for the fifth and last date of group A of the Copa América Femenina 2022, at the Centenario Stadium in Armenia and qualified as the first in the area with a perfect score of 12 points out of 12 possible.The game began with intensity by the Colombians, who very quickly found the first goal of the night after 4 minutes. They recovered a ball in the midfield with Liana Salazar and Linda Caicedo, the striker assisted Catalina Usme, who crossed the ball for the 1-0 partial.The Chileans did not react and the locals continued to attack. At minute 10, Usme took a free kick from the side to the area, one of the central defenders collided with Christiane Endler, released the ball and Daniela Arias was very attentive to the action, defining the 2 to 0.Around 33 minutes, Chile had the first clear opportunity to recover the ball at Colombia’s exit with Fabiola Jiménez.

Four minutes later, Colombia scored the third goal. Nelson Abadía came out with speed from their own field, Lorena Bedoya assisted Manuela Vanegas, who alone against the rival goalkeeper, scored the 3-0. Again four minutes later, Leicy Santos executed a free kick from one of the wings, Liana Salazar appeared alone without a mark and headed in the fourth of the night. 4-0 at half time, it was also the result at the end of the game . What a splendid first half Paraguay reached for the first time in History the semi finals of a Copa America and a place in the 2023 Pan American Games. Against Ecuador, both looking for the chance to continue in the race, the game was spectacular. A header of Jessica Martinez (30’) allowed Paraguay to open the score. She accumulated her third goal in this tournament. At the end of the first half, Kerly Real scored the tying goal for the team of Emily Lima. Paraguay never gave up and in the 91st minute, Lice Chamorro put the cherry on the cake, scoring the winning and qualifications goal !