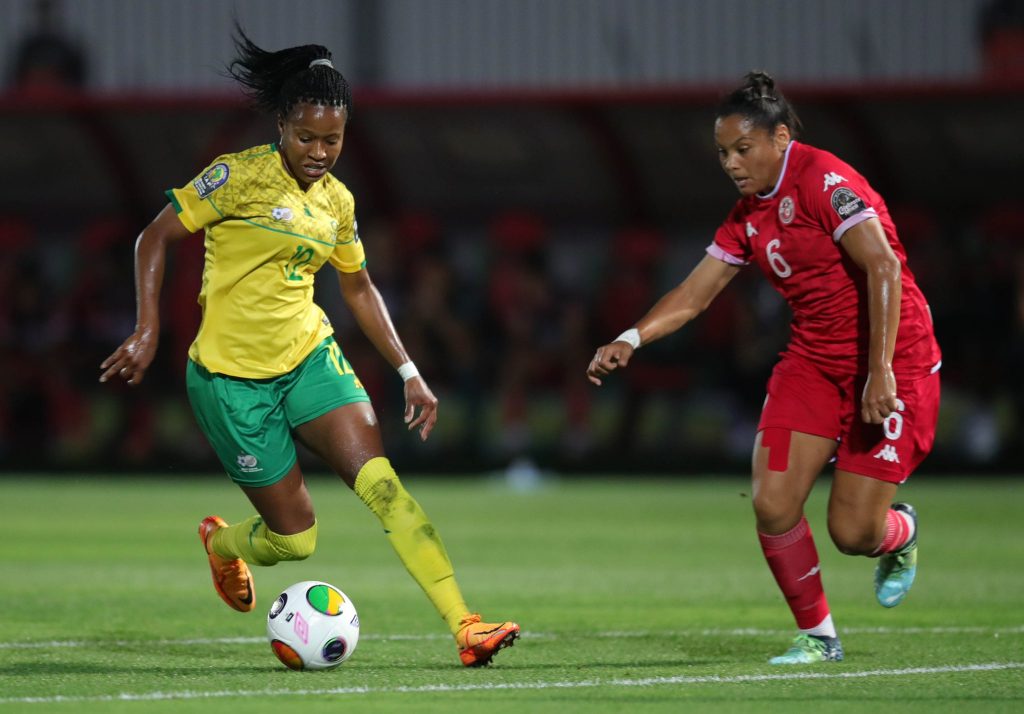 Picture : Jermaine Seoposenwe scored the goal of the match for south Africa !

A prophecy by coach Gabriel Zabo that Cameroon would ultimately put a stop to recurrent defeats of his country at the hands of Nigeria during their quarterfinals date Thursday was almost fulfilled. But once more, Nigeria prevailed 1-0 to pick the third qualification visa.

The physically more imposing and better trained Nigerians were almost given a run for their self esteem. However they rallied from the Cameroonian resilience to make two critical incursions upfront on 30 and 41 minutes. But keeper Bawou stopped Ifeoma Onumonu’s effort as well as Halimatu Ayinde’s short sailed wide, respectively. 7 shots at goal from Nigeria and barely 1 from Cameroon gave a mathematical edge to the attacking power of the former. Then came the 57th minute and a cross from the edge of the box sent the ball directly to the waiting head of Rasheedat Ajibade who expertly connected, beating the diving Ange Bawou to her right for the lone goal. Thereafter, Cameroon gave their game plan a metamorphosis that earned them credit as they held Nigeria hostage in their own half. The Lionesses came close to striking distance severally but fell short of the requirements for an equalizer. Nigeria therefore became the third side to qualify from Africa for the 2022 FIFA Women’s World Cup while the podium at the Mohammed V Stadium received Rasheedat Ajibade ( PICTURE DOWN) for her first Woman-of-the-Match award in the tournament. Cameroon will now face Botswana on Sunday at 9 p.m. for a chance to qualify for the Confederations playoffs for a place at next year’s FIFA World Cup.

At the Moulay Hassan FUS, South Africa and Tunisia battled it every inch of the way for the golden fleece. But the player named Jermaine Seoposenwe went the extra mile to make her presence felt adequately. Just 10 minutes into play she closed in on the Tunisian defense only for her diagonal kick to be stopped by keeper Salima Jobrani. However that security assurance at the rear would be short-lived for four minutes on the clearly best player on display was back at it. This time, she outran two markers  at midfield to slip the ball past the keeper for the opener. Tunisia tried to replicate with Sabrine Ellozi and Leila Maknoun, respectively seeing their close range efforts on 18 and 26 minutes formidably stopped by the keeper. A quality-packed Tunisian side held their own and raised the stakes but were unfortunate not to be offered a penalty on 90 minutes when Sabrine Ellouzi was tripped in the box as she headed for the goal. It closed 1-0 and Jermaine Seoposenwe predictably lifted the Woman-of-the-Match award. Tunisia will now face Senegal on Sunday at 6 p.m. for a chance to qualify for the Confederations playoffs for a place at next year’s FIFA World Cup.

The two semifinals will be played on Monday July 18. Zambia vs South Africa at  6 p.m. at the Mohammed V Stadium, Casablanca; and Morocco vs Nigeria at the Prince Moulay Abdellah Stadium, Rabat at 9 p.m.