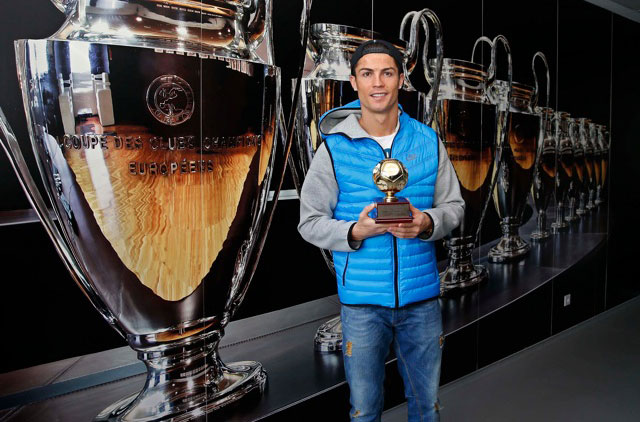 Ronaldo, after being named the UEFA Champions League Top Scorer with a record of 17 goals , the Pichichi Trophy and the European Soulier d’Or with 31 goals, ended 2014 by claiming the IFFHS Award with a total of 20 goals, five for Portugal and 15 for Real Madrid. The prolific striker had won the Award in 2013 with 25 goals and in holding his title he joined Lionel Messi (2011 and 2012) as the only players to win in successive years.

Three Spanish based players topped the voting with Ronaldo being joined by South Americans Neymar (Brazil) who finished second on 19 goals and Argentina’s Messi third on 18 goals. Both play for FC Barcelona. Neymar posted the highest number of national team goals with 15 while Ronaldo had the best club score with the same total.

A total of 54 players scored seven or more goals. The list consisted of 22 Europeans, 14 South Americans, 9 asians, 8 Africans and one from CONCACAF. Brazil holds the highest number of goal scorers with five players, followed by Colombia, Croatia, Germany and Netherlands with 3, Belgium, Chile, England, france, Philippines, Spain and Uruguay with 2.

In club football, 34 played in Europe, 12 in Asia, 5 in Africa and 3 in CONCACAF. FC Bayern München fielded the most with five players, followed by FC Barcelona, FC Porto and Real Madrid CF with three, and then Arsenal FC, FC Red Bull Salzburg, Manchester United FC, VfL Wolfsburg and Yangon United FC with two.