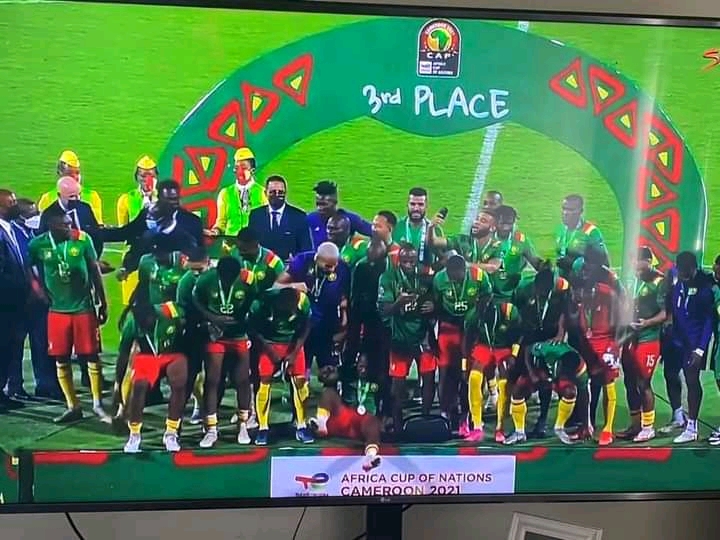 Taking to the Ahmadou Ahidjo Stadium this Saturday night for the third spot game, Burkina Faso knew the hosts had not lost therein for the past 34 years. Therefore, they knew nothing would be certain until the referee’s final whistle. Little wonder then that Cameroon could come back and win at the shootout after Burkina Faso had led the game on 50 minutes, 3-0.

A Cameroon team transformed at about 90% from the standard one since the start of the competition endured the ruthlessness of the opponents and had a logical slap in the face in the 24th minute when Steeve Yago scored from a near identical position from where they got their first goal against Cameroon in the AFCON opener on 9 January. With the irate largely Cameroonian crowd beginning to lose faith, keeper André Onana fumbled with the ball following a cross by Issa Kaboréstraight at the goal for the second for Burkina Faso.

Cameroon trainer, Toni Conceiçao made two tactical substitutions upon resumption, bringing on captain, Vincent Onana and attacker, Karl Toko Ekambi for Samuel Oum Guet and  Ignatius Ganago. The move paid off, but not before the 50th minute swift and deadly header by Djibril Ouattara to put Burkina Faso ahead, 3-0. Stéphane Bahoken scored the first goal for Cameroon in the 71st minute at the end of concerted effort in the area following a corner kick. And then came the Vincent Aboubakar  double moments of redemption for Cameroon. He headed home in the 85th minute as the terraces of the stadium were being deserted by dejected fans. His 8th goal in the tournament and game equalizer came in two minutes later following an airborne collision between keeper Farid Ouedraogo and his defender, giving the scorer the leeway to the golden fleece. At 3/3 the rules send the third spot match to the shootout.

As happened in the semifinals shootout, Vincent Aboubakar took the first kick in the shootout and for Cameroon. His success was emulated by Moumi Ngamaleu, Toko Ekambi, Kunde Malong and Oyongo Bitolo. For Burkina Faso, the successful debut by Issa Kaboré was duplicated by Soumaila Ouattara andSteeve Yago. But Ibrahim Touré saw his kick stopped by André Onana who promptly received vindication from the public deeply disappointed by his performance in the game. Final score, 8/7 as Burkinabe captain, Bertrand Traoré was voted most valuable player of the match.

This Sunday, the final game pits Senegal whose best AFCON record is 2 silver medals in 2002 and 2019 against Egypt, 7-time winners. The match to kick off at the Olembe  as from 8 p.m. will have as guest of honour, Cameroon president, Paul Biya, accompanied by his wife, Chantal Biya.