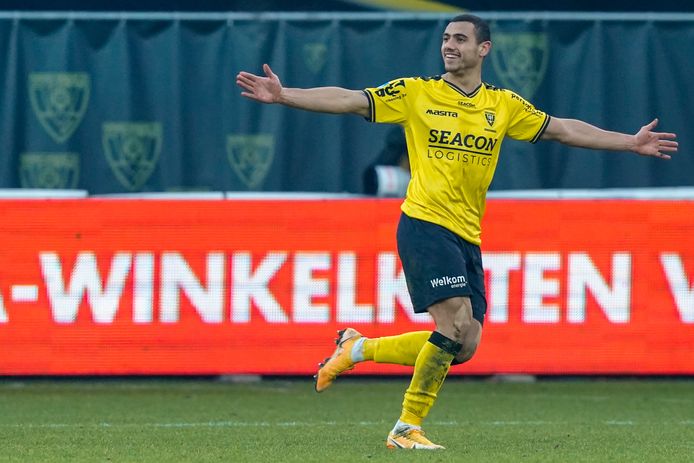 Picture : Georgios Giakoumakis, 11 goals with Venlo in the Netherlands.

The World’s Best Goal Scorer 2021 at January 31: Giakoumakis and Bounedjah on top!

New faces lead the ranking after the first month of 2021. No one of three leaders figured even in top-50 of the list of World’s best goal-scorers of the last year.
However, Baghdad Bounedjah (picture down) is quite famous striker, at least in his region. Moreover, he won already one annual contest in this category having scored 58 goals in 2018. After taking some “rest” in next two years, the Algerian started 2021 with a big desire to fight for the title again.
Bounedjah exploded with 11 goals scored for Al Sadd in first 4 games of new year in Qatari Start League. It was his only 4 games played in January; in each of them he scored at least 2 goals including a hat-trick vs Al Duhail (3:1, Jan 12) and a “poker” (Italian term used for 4 goals in a match) vs Al Sailiya (8:0, Jan 7).
Then, Al Sadd crushed his rival Muaither 7:0 in Emir Cup game on Jan 26. It would be a good chance for Baghdad to add next 3 or 4 goals to his tally; but he annoyingly was not given to play even a minute.

As for other two guys topping the January ranking, Georgios Giakoumakis and Aaron Boupendza, they were never noticed as decent goal-scorers before this season.
Particularly, Giakoumakis, 26 year old Greek based in Netherlands: he scored only 10 goals in total for 3 previous seasons (in all competitions). Now he dominates Eredivisie having scored for Venlo 21 goals, almost twice more than anyone else in the league! 11 of them occurred in January, including two “pokers”, vs Den Haag (4:1, Jan 13) and vs Vitesse (also 4:1, Jan 27).
Venlo runs only 14th in Eredivisie and scored total 34 goals in the league. You can easily calculate the Giakoumakis share: he scores 62 per cent of all his team’s goals. Very rare case in the world football!
Bupendza’s is also amazing. This 24 year old Gabonese didn’t play at top flight before this season. And even in low-ranked divisions of Portugal and France where he tried during last seasons, he didn’t prove too prolific. Now he confidently leads Turkish Super-League goal-scorers’ contest with 15 goals for Hatayspor. 8 of them were scored in January.
Giakoumakis and Bounedjah have identical data at the moment; the Greek takes first place due to next criteria: strength of the league. Eredivisie is higher in the IFFHS ranking than Stars League.
Robert Lewandowski, 2020 winner, runs joint 5th with 7 goals. The other leaders of the 2020 edition are beyond the current top-20. Lukaku scored 5 goals in January, Cristiano Ronaldo and Haaland 4 goals each.

A Greek forward Georgios Giakoumakis leads the annual ranking of world’s national top division goal-scorers after the first month of 2021. He managed to score 11 goals in 7 matches of Netherlands league in January.
Same amount is on current tally of the Algerian Baghdad Bounedjah from Al Sadd (Qatar). He takes 2nd place due to tiebreak criteria: strength of the league (by IFFHS ranking).
The top part of ranking nearly coincides the one of other category (World’s Best Goal-Scorer 2021); it’s because many leading goal-scorers’ January tallies were formed entirely by domestic league goals. Cup goals contributed only a little bit and international actually not at all.
The 2020 winner Cristiano Ronaldo is yet far from top; he scored only 3 league goals in January.