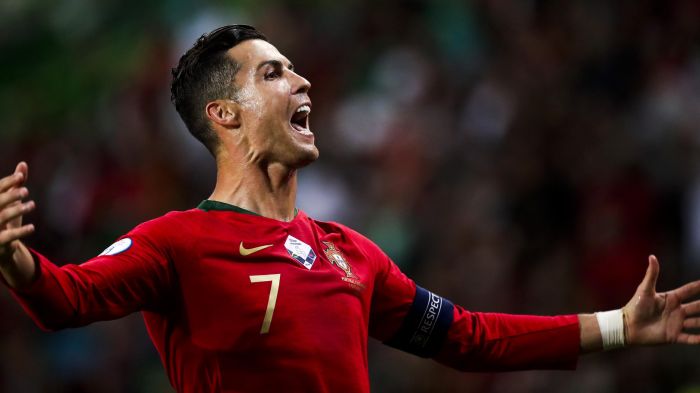 Last week, Cristiano Ronaldo has reached the mark of 700 official Goals in his career ! Only Josef Bican (805), Romario (772), Pelé (767) and Gerd Muller (735) have realised this exploit before him in officials matches (top division and international).

Petr Cech led the Guildford Phoenix to a shoot-out victory on his ice hockey debut.

The former Chelsea and Arsenal goalkeeper – now a technical adviser with the Blues – saved two efforts in the shoot-out as his side beat Swindon Wildcats’ second string 3-2 at the Guildford Spectrum.

Cech, who played the sport as a youngster in the Czech Republic, joined the English fourth-tier ice hockey team earlier in the week.

He saved Swindon’s first and last efforts to secure his side the victory and was named his side’s man of the match.

One player , captain Wendie Renard (picture), is the only Player who was in the team since the beginning in 2006 at 18. She has won all the titles with Lyon , has played 350 games (108 goals) as Central Defender and holds also the Record of the Games in the UEFA Champions League (84) and goals for defender (24).

Ada Hegerberg is the Norwegian Goal Scorer of Lyon. She has scored last week the goals 50 and 51 in the UEFA Champions League and has equalled Anja Mittag (Germany), who holded the Record since some years. Ada, 24 years old, has scored her 51 goals in 49 matches and is certainly the future Holder of the Top Goal Scorer Record in the UEFA Champions League. The 30 October, Lyon will play the second round against Hjorring, maybe a new Record for Ada !

Chad, Gambia, Sao Tomé and Principe, and South Sudan have qualified from the preliminary round of  lowest-ranked teams to join forty other countries ready to kickoff the group qualifications for the 2021 Total Africa Cup of nations to be hosted by 5-time winners of the 62-year-old tournament, Cameroon. The quartet qualified after second leg matches yesterday at the end of which their casualties were, respectively, Liberia, Djibouti, Mauritius, and Seychelles.

Before those preliminary qualifiers, this is how the teams were drawn ahead of the final journey to the Africa Cup of Nations, Cameroon 2021:

At the end of the group qualifiers, the best two teams will be eligible to participate in the finals scheduled for Cameroon in 2021 when the Confederation for African Football, CAF, will organize the second edition of the competition to feature 24 teams after Egypt 2019 won by Algeria.

Lionel Messi has received his historic sixth Golden Shoe Award, his third successive win of the accolade, in a ceremony at the Antigua Fabrica Estrella Damm in Barcelona, Wednesday, October 16, 2019. The Barcelona player whose full names are Lionel Andrés Messi Cuccitini (fondly called Leo Messi) won the award way back in May when he emerged highest scorer in Europe’s top divisions during the 2018/2019 season with 36 goals. He outscored Cameroonian-born French national of Paris St. Germain, Kylian Mbappe  by 3 goals.

During yesterday’s ceremony, Leo Messi, multiple IFFHS Award winner (9 Trophies), was joined on stage by his wife, Antonella Roccuzzo and sons, Thiago and Mateo, who were clearly under a bright spotlight as the family head received as well the award for the 2017/2018 award for scoring 34 goals then.

Lionel Messi, who, during the ceremony congratulated his teammates, family and fans on what he described as collective effort to achieve gold, is emphatically shooting for beyond the galaxies as his latest achievement has come to put more tensile stress on a collapsing shelf of European Golden Shoe Awards which include previously, 2009/10 – 34 goals, 2011/12 – 50 goals, 2012/13 – 46 goals, 2016/17 – 37 goals, and 2017/2018 – 34 goals. All six accolades were on display during yesterday’s event.

Sudan lost from Tanzania (1-2) on Friday, at the Elmerrikh Stadium in Omdorman city , in the second leg of the final stage of the region of CECAFA, qualifying for the finals of the African Nations Championship “CHAN”. Sudan advanced first in the 30th minute, through Amir Kamal, before Tanzania equalized in the 49th minute through Erasto Edward, then Detram Adrian scored the second goal in the 78th minute.Sudan won the first match (1-0), to draw the two teams (2-2) in the total of the two meetings, but Tanzania benefit from scoring two goals away from home and qualify for the finals scheduled in Cameroon, next year 2020.