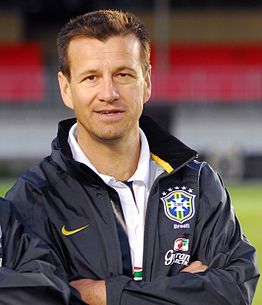 In July 2006, Dunga became the new National Coach of Brazil in replacement for Carlos Alberto Parreira. He took in charge this job four years, winning the Copa America 2007, the Olympic Bronze Medal 2008, the FIFA Confederations Cup 2009 and reaching the quarter finals at the World Cup 2010. He was crowned in 2007 as THE WORLD’S BEST NATIONAL COACH by IFFHS after his success in the Copa America. After 2010 , he became Head Coach of International (2012/13), before a second time appointment with Brazil’s National team in 2014. He stayed there two years without success.