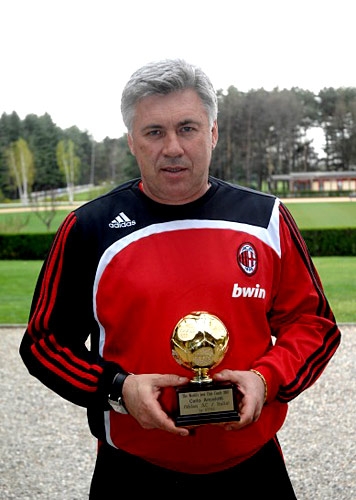 At international level, Carlo Ancelotti was capped 26 times with Italy’s National Team (one goal) and participated at two FIFA World Cups (1986, 1990), finishing at the third place in 1990 , as well as at the UEFA Euro 1988, where he reached the semi final.

He received the IFFHS Trophy 2007 in Milanello

After Italy, England, France and Spain, he went to Germany at FC Bayern München in 2016/17. He won the Bundesliga title (2016/17) and two UEFA Super Cups (2016, 2017). After one free year, he signed again in Italy at SSC Napoli where he is the current manager with attractive football.

Carlo Ancelotti is one of only 3 managers (with Bob Paisley and Zinedine Zidane) to have won the UEFA Champions League 3 times (two with AC Milan, one with Real Madrid CF) and he is one of only 7 people (with Miguel Munoz, Giovanni Trapattoni, Johan Cruyff, Frank Rijkaard, Pep Guardiola, Zinedine Zidane) to have won the tournament both as player and as manager.