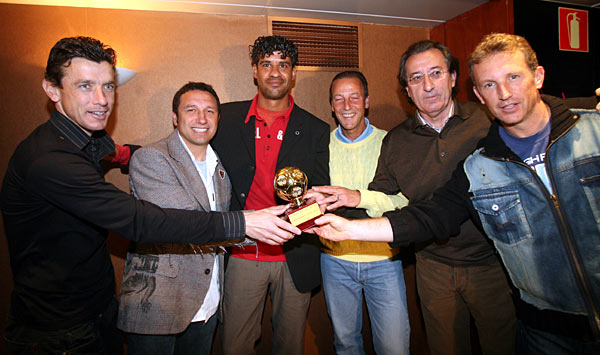 Picture : Frank Rijkaard and his staff received the IFFHS Trophy 2006 in Barcelona.

Franklin Edmundo Rijkaard, born 30 September 1962 in Amsterdam, represented with Ruud Gullit and Marco Van Basten one of the golden generation of Dutch football. He was a great international player for Ajax Amsterdam and Milan AC before being a super manager with FC Barcelona and Galatasaray. And he was also player and manager of the Netherlands National team !

Ending his player career in 1995 with Ajax Amsterdam, his native club, Rijkaard served as an assistant coach before being appointed manager of the Netherlands National team in 1998, only 4 years after having his last game as player ! He guided the team to the semi-finals of the Euro 2000 , losing only  on penalties against Italy and resigning immediately. During the season 2001/02, he became manager of Sparta Rotterdam in the Eredivisie without success, ending in a relegation to the Second Division.

Frank Rijkaard was the coach who gave his debut with FC Barcelona to Lionel Messi the 17 October 2004 !

Less than one year later, he was appointed manager of FC Barcelona with a new managerial board. He stayed in Spain five years, winning 2 La Liga Champion titles 2004/05 and 2005/06, 2 Supercopa de Espana 2005 and 2006 and particularly the UEFA Champions League 2005/06 ! 2006 was his greatest year as Manager : he won 3 titles with the club (La Liga, Supercopa de Espana, UEFA Champions League) and was crowned The Manager of the Year by UEFA, DON BALON and above all as THE WORLD’S  BEST CLUB COACH OF THE YEAR by IFFHS !

He went in Turkey to Galatasaray (2009/10) before taking in charge the Saudi Arabia National team during two years (2011 to 2013). He had no success and so in March 2014, Frank Rijkaard announced his retirement as manager. He is today consultant.