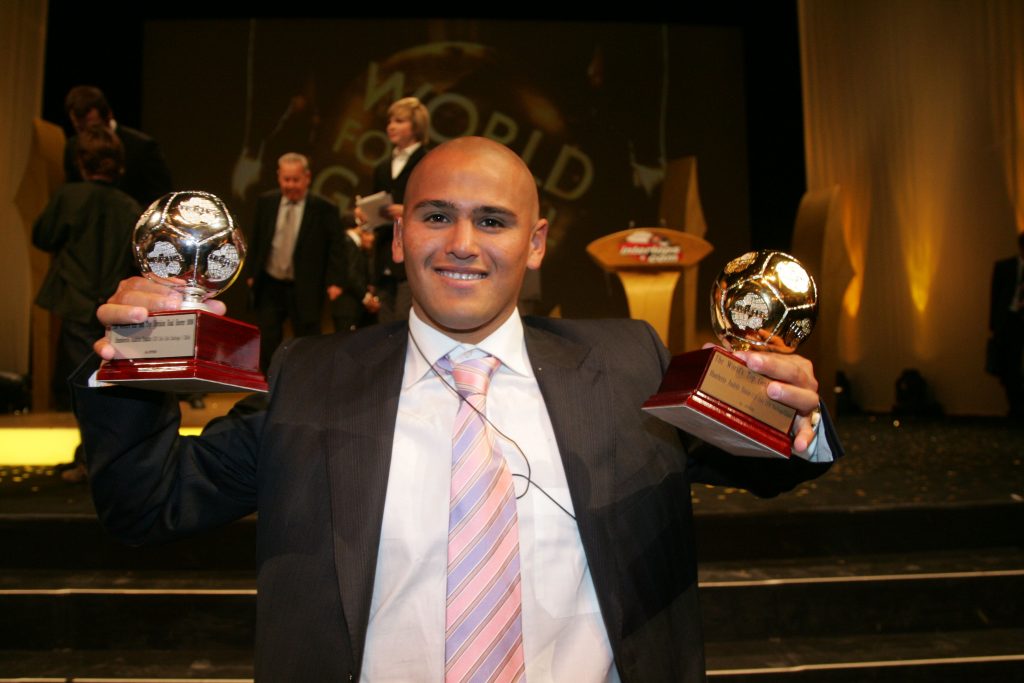 Humberto Andrès Suazo Pontivo, born 10 May 1981 in San Antonio, is a Chilean international striker who plays currently for San Antonio Unide. He won the IFFHS Award 2006 of THE WORLD’S BEST TOP GOAL SCORER of the Year and three CONCACAF Champions League !

After a difficult youth career at Club Torino and Universidad Catolica, he made his professional debut with Nublense in second division in 2000 and scored his first goal against Magallanes, his next step before joining San Antonio Unido in 2002. He scored 23 goals in 30 matches and went to the third division club San Luis de Quillota in 2003. He scored there 39 goals in 40 matches, so that he accepted the proposition of Audax Italiano. he stayed there one season 2004/05 and scored 40 goals in 62 matches .

The most titled Club of Chile, CSD Colo Colo, signed Suazo in 2006. It was the best season of his career ! He won the Chilean Primera Division Apertura 2006, Clausura 2006, Apertura 2007 and became the Chilean Top Goal Scorer 2006, 2007 . He was crowned as THE WORLD’S BEST TOP GOAL SCORER 2006 by IFFHS, scoring 52 goals in 54 matches for Colo Colo and 17 international goals, one more than Peter Crouch of Liverpool ! Runner-up in the Copa Sudamericana 2006, he became also the Top Goal Scorer of the competition. Suazo entered in the history of Colo Colo in one season. He was also second in the IFFHS ranking of THE WORLD’S BEST TOP DIVISION GOAL SCORER 2006  just behind Klaas-Jan Huntelaar.

In 2015 he returned to Colo Colo, scoring 3 goals in 17 matches before announcing his retirement from football in January 2016. However he joined his former club San Antonio Unido which played in Segundo Division and continue to score goals !