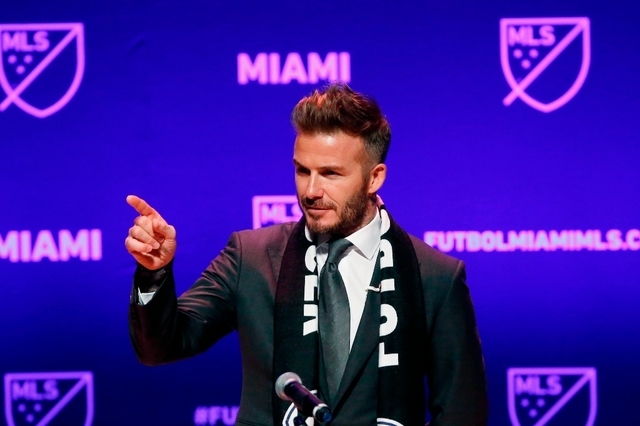 IFFHS STATISTICS AND NEWS OF THE WEEK 9

IFFHS legend player, and former England captain, David Beckham has added a new dimension to his football image with the debut in the Major League Soccer, MLS, of his franchise, Inter Miami. Although they lost to the Los Angeles FC, 1-0, Club Internacional de Futbol Miami made history with the debut to effect a part of the contract of being able to subsequently own a franchise at a reduced rate when Beckham moved from Real Madrid to the Los Angeles Galaxy in 2007.

David Beckham who is actually one of the owners, as well as president of the soccer operations in the club watched from the director`s box in the company of his wife, Victoria, and son, Brooklyn as Inter succumbed to the lone goal of the match which was a 44th minute shot by opponent player, Carlos Vela, celebrating his 31stbirthday in the achievement.

Inter Miami which already have a huge fan base hope to do better than thirty previous teams from the State of Florida to have graced the MLS. But, first they look to relocate to their rightful stadium site in 2022 whose unavailability had delayed Beckham`s right to the franchise for six years.

The 30-year-old who endured a pay cut to barely secure a deadline loan from Chinese Super League team, Shenhua Shanghai in January, scored the second goal at the 34th minute for Manchester United as they cruised past Club Brugge 5-0 tonight at Old Trafford to make it to the Europa League Round of 16 on a 6-1 aggregate.

Odion Jude Ighalo who celebrated the goal by raising the United shirt and revealing a t-shirt with the effigy of his sister, Mary who died last December, does not only become the first Nigerian to play in the colors of his boyhood dreams, Manchester United, but is also the first African to score for the club since teammate, Ivorian Eric Bailly scored against Swansea in the Premier League in August 2017.

“It is a dream come true,” said Ighalo who was not only a childhood idolater  of Manchester United, but whose manager, Ole Gunnar Solskjaer celebrated the debutant at the end of the game in these words: “ He plays upfront; he can play with his back to the goal as a good example  of what we want from him…he is what we have been lacking a little bit.”

Manchester United who had other goals on the night from Fernandes(27th minute penalty), McTominay(41st), Fred(82nd and 93rd), as against a 22nd minute reaction from Brugge, will next visit Everton on Sunday for a Premier League fixture.

The Hornets victory at Vicarage Road is the first the Reds have suffered since losing to Manchester City in January, 2019; and it ends their joint-longest winning streak(18) and second longest unbeaten run(44) in the history of the English Premier League.

Liverpool who were failing to score for the first time in the Premier League since their goalless draw with Everton in March 2019, were also ending a run of scoring in 36 consecutive league games.

Watford who were registering their 6th victory in 28 games, saw a dramatic change in their fortunes as new manager Nigel Pearson was registering his 4th win in 5 games, and rekindling hopes for survival in the Premier League.

PAOLO GUERRERO FOR A NEW RECORD ?

Aged 36, Paolo Guerrero, the Peruvian striker (39 goals in 101 international caps) has the possibility to break the All-Time Goal record of the Copa America held by Zizinho (Brazil) and Norberto Mendez (Argentina) 17 goals each. Guerrero heped Peru to take the third place in 2011 and 2015, the second place in 2019 , finishing as Top Scorer in all three editions of the Tournament. He totalized already 14 goals in the Copa America and the edition 2020 (12 June to 12 July 2020 in Argentina and Colombia) is for him the chance to enter in the All Time Top Goal Scorer Record History !

During Bayern’s game against Hoffenheim in Sinsheim on Saturday, a game in which they won 6-0, visiting Bayern fans in the away supporter section of PreZero Arena revealed multiple banners calling Hopp a Hurensohn. The actions caused a game stoppage of roughly 15 minutes, after which Bayern and Hoffenheim players kicked the ball around to run out the clock.

“I must say clearly and definitively: I am ashamed ... of what happened in the away end,” Rummenigge told reporters after the game. “I apologized to Hopp  but there is nothing to apologize for, because what happened was inexcusable.”

Rummenigge said: “It was a dark day for football.”

Bayern were relentless on both sides of the ball. With six goals in the back of the net and a shutout on defense, Bayern showed that they mean business. It was a brilliant response to a 3-0 Champions League victory in Chelsea in the Champions League.. This was a clear signal to the Bundesliga and to Europe that Bayern Munich is here to win it all this year.

Whatever your thoughts are on the matter, it is a shame that these protests will overshadow the brilliant display of soccer on the field. This will go down as one of the strangest endings of all time.

Saudi Arabia has launched its own Women’s Football League (WFL), in a move seen as an advancement for women’s rights in the Kingdom. The WFL was launched at an event in the capital Riyadh last week.

The President of Saudi Arabia’s Sports for All Federation (SFA), Prince Khaled Bin Al-Waleed Bin Talal told Arab News that, “The development of the WFL came about because we understood there was a need for community-level football for women.” The league, he pointed out, is the first of many community sports opportunities for women in Saudi Arabia. “It will serve as a great model in terms of league infrastructure and inclusion matrix, contributing to Saudi Vision 2030 and the Quality of Life programme.”

The WFL is fully funded by the SFA and is a nationwide league for women players aged 17 and over. In its first season, it will have a presence only in Riyadh, Jeddah and Dammam in which matches will be played to determine regional champions.

The WFL, said Prince Khaled, is a major and transformative move toward the Kingdom’s goal to achieve Vision 2030. “The league is one more major leap forward for the future of our country, our health, our youth and our ambitions to see every athlete recognised and nurtured to their full capability.”