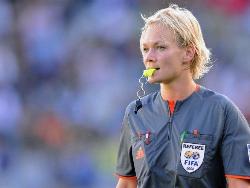 It is a great event in the Football World ! For the first time, a woman referee is promoted to referee in the top level of German men’s football, the Bundesliga, making her the first female referee in the league’s history and in the European History ! Bibiana Steinhaus (38 years old)  is since 2005 international referee in the Woman football. She was chosen to officiate the 2011 World Cup Final, the 2012 Olympic Final, the Champions League finals more times and since 2007, she was selected for the Second Man Bundesliga before to become in 2014 the fourth referee in the First Bundesliga and today the Referee in the Men Bundesliga ! A fantastic career for Bibiana, who has won two IFFHS Awards of THE WORLD’S BEST WOMAN REFEREE  in 2013 and 2014, taking the second and third places in 2012, 2015 and 2016 ! She is one of the favorites for the IFFHS Award 2017 with last year winner Katalin Kulcsar and the Euro Final referee Esther Stäubli.