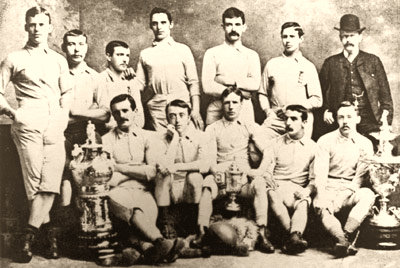 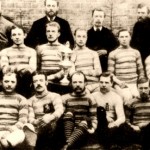 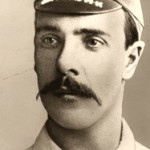 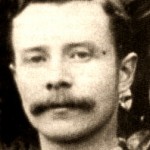 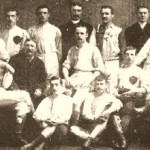 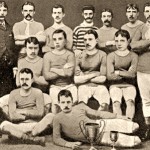 The world’s first compensation in football

On March 12, 1881, thetwooutsiders Moyola Park FC Castledawson and Alexander FC Limavady metinthe Irish Cup (final score 3:0). During this match, one of the Limavady players sustained a leg fracture due to rough play by one of the opposing players. On March 16, 1881, the Irish Football Association (IFA) decided to award the injured player a compensation of £1. This was a considerable sum in those days, given that the cup entry fee was only 1 shilling (12 pence). This seems to have been the first compensation ever awarded to any footballer worldwide.

The better high jumper suffered a humiliating defeat in football

Scottish full-back Andrew Watson made his international début when Scotland won their great 6:1 away victory over England in London on March 12, 1881. He played for Queen’s Park FC (Glasgow) at the time, with whom he won the Scottish Cup three times. He had previously studied in England (Harrow). He also excelled at track and field and was one of the best Scottish high jumpers. After the turn of the century, the engineer, who was born in May 1857, went to Bombay (now Mumbai), India. England’s national team, for their part, included inside forward Reginald Heber Macauley (24.8.1858-15.12.1937), who played for Cambridge University and whose only full “A” international this was. He was an even better athlete, outstanding at the quarter-mile race and English high jump champion in 1879. Curiously, this merchant by profession, also worked in India, from 1884 to 1901.

When Wales beat Ireland 7:1 in Wrexham on February 25, 1882, one of the Welsh forwards was Edward Gough Shaw of Oswestry FC. He was the brother-in-law of Welsh international “Tom” Owen, a good dribbler and a strong runner. Edward Shaw worked at his father’s hardware and household goods store, but fell out with his family because of his dissolute lifestyle. One day he left his home in Oswestry and was never seen again by his family or neighbours. He is believed to have died in the USA.

The Football Association (FA, London) allowed Scottish, Irish and Welsh clubs to participate in the FA Cup, which some did. In turn, the FA of Wales invited English clubs to participate in the Welsh Cup. The offer was taken up mainly by clubs located near the border. In 1882 Northwich Victoria became the first English club to reach the Welsh Cup final, but did not stand a chance against Druids of Ruabon (0:5). Two of the Northwich Victoria players – Frederick William Hughes and William Hughes – had Welsh names but were not Welsh.

When England beat Wales 5:0 in London on February 3, 1883, the English attack included Harry Chester Goodhart (17.7.1858-21.4.1895), who attended Eton College and Trinity College in Cambridge and played for Old Etonians. The three times international was a lecturer at Cambridge University from 1884 to 1890, and from then until his early death professor of the arts at the University of Edinburgh.

The first goalkeeper to score at during a full “A” international

James McAulay (28.8.1860-13.1.1943) of Scotland was a brilliant keeper who kept goal for Scotland eight times from 1883 onwards. Earlier, when Scotland beat Wales 5:0 in Glasgow on March 25, 1882, James McAulay made his international début at centre forward and scored a goal. The goalkeeper from Dumbarton FC also proved his scoring ability with his club on occasions. The engineer ended his footballing career prematurely in 1887 when he went professionally to Burma (now Myanmar) for an extended period.

In 1884 Ireland lost all three of their full “A” internationals and only scored one goal, during their 1:8 defeat to England. The scorer was William B.R. McWha, who at the time was with Cliftonville FC (Belfast). After his medicine course, the forward went to India, where he worked as a physician. He met a tragic end when he drowned while hunting ducks. He played for Ireland seven times from 1882 to 1885.

In 1884 Oswestry FC became the second English club to reach the Welsh Cup final, where they faced Welsh giants Druids of Ruabon. The final match ended a scoreless draw – matches at the Welsh Cup still were not extended at the time – but Oswestry then won the replay (1:0). It was curious that the English team included nine players who had played for Wales. One year later there was a repeat of this cup final, which Druids of Ruabon won.

On September 12, 1884, during the first round of the 1884/85 season of the Scottish Cup, Arbroath FC beat Bon Accord (Aberdeen) 36:0, John Petrie alone scoring 13 goals. Curiously, on the same day, and during the same cup round, Dundee Harp beat Aberdeen Rovers 35:0, A. D’Arcy scoring 10 goals. Truly two all-time records. But the team of Bon Accord included many cricket players.

Back in 1872 and 1873, when all FA Cup matches still were held in London, Queen‘s Park FC (Glasgow) dropped out, for financial reasons (for the journey by train), undefeated at the semi-finals stage. The Scots reached the FA Cup semi-finals again 12 years later, in 1884 when they beat Blackburn Olympic (4:1) in Nottingham. But Queen‘s Park lost the cup final against Blackburn Rovers FC (1:2). A year later, Queen‘s Park FC beat Nottingham Forest (3:0) in the semi-finals. Curiously, once again it was Blackburn Rovers FC who kept the trophy in England, with a 2:0 victory over the Scots.

When England beat Ireland 6:1 in Belfast on March 13, 1886, John Edward Leighton (26.3.1865-15.4.1944) played his only full “A” international at outside left. Leighton was born in Nottingham and after school football he joined Nottingham Forest. After he retired in 1888, he never missed one of Nottingham Forest’s home matches. The paper and stationery wholesaler died during a match at the Forest Ground.

During the 1886 Irish Cup final, where Distillery FC (Belfast) prevailed over Limavady FC from the north of the country, Limavady fielded three sets of brothers: John and “Tom” Fleming, “Matt” and “Bob” Douglas, as well as John and Joseph Sherrard. However, the real curiosity of the match was that Distillery fielded a father-and-son duo in defence, Wilson Sr. and Wilson Jr., just as they had done in 1884, when they also won the cup. Father and captain Matthew Wilson was 45-year-old and his son Robert 19-year-old. Both also played in the Irish national team.

Wins the trophy and then makes a new one

When Aston Villa won the English Cup in 1887, Oliver Howard Vaughton (9.1.1861-6.1.1937) was a mainstay of the team. The inside left was an excellent and very intelligent team player, gifted with a powerful shot and quite unpredictable. The five times English international, a silversmith by profession, not only won the FA Cup, but his company also made a second trophy after the first one was stolen in 1895.

On October 29, 1887, during the first round, the Irish Cup registered the highest home and away wins in its history: On the same day, Distillery FC (Belfast) beat United Steamships 18:0 at the Belfast Broadway while Montalto FC lost 0:18 to Glentoran FC Belfast at Ballynahinch. These records stand to this day. Distillery FC did reach the final, but then lost to their local rivals Cliftonville FC Belfast (1:2).

Wales FA secretary lined up for full “A” international

On March 12, 1887, Ireland won their first ever full “A” international when they beat Wales 4:1 in Belfast. The Welsh had Robert Roberts in the goal, normally a full-back who had played in defence for his first full “A” international. Since one of the nominated players did not appear, Wales had only ten. Wales FA secretary Alexander Hunter (1862-16.12.1899) obliged, and lined himself up as centre-half. Thus Wales were not longer short-handed, but even this full side was unable to prevent a defeat.

Three Wales players leave the pitch before the final whistle

On March 3, 1888, Wales beat Ireland 11:0 in Wrexham. Not only is this the hosts’ double figures win, it is  rather surprising that three of the Wales players also left the pitch early – and together – when the score stood at 10:0 to catch their respective trains to London, Cambridge and Builth. These were team captain Dr. Alfred Owen Davies, William Ernest Pryce-Jones (who studied in Cambridge) and Edmund Gwynne Howell.

Regular player after conceding 11 goals at his international début

On his international début for Ireland on March 3, 1888, William John Clugston (who never used his first Christian name himself) saw his team lose to Wales in Wrexham by a double figure margin (0:11). Usually, a goalkeeper who concedes so many goals does not get a second chance with the national team. However, the Cliftonville FC (Belfast) goalkeeper kept goal for Ireland another 13 times until 1893. During his total of 14 full “A” internationals for Ireland, John Clugston conceded 69 goals, almost five per match. John Clugston was also a lacrosse international.

One brother plays for England, the other for Ireland

The first top scorer of the first English championship, and world best Top Division scorer, was John Goodall (19.6.1863-20.5.1942), who also was considered the best footballer in the world at the time. Born in London to Scottish parents, he learned to play football in Kilmarnock (Scotland) before returning to England, where he played for Preston North End and Derby County. He was a brilliant inside forward and a natural playmaker with many unexpected ideas who directed his team-mates to good effect. He also was outstanding in the English national team. His younger brother Archibald Goodall who had transferred to Derby County before he was,where he played an excellent centre-half. Since “Archie” Goodall was born in Ireland, he was eligible for the Irish national team by the rules then in use, and for whom he played.

When England lost to Scotland (2:3) in London on April 13, 1889, Henry Edward Denison Hammond (26.11.1866-16.6.1910) was the right half-back. He was studying at Oxford at the time, and also played for the university team. Hammond, who was English and also a good cricketer, was affiliated to the Edinburgh Academy from 1890 to 1899. The following year he became the General Director (Minister) of Education of Rhodesia (now Zimbabwe), where he died.

A future knight plays for Ireland

When Ireland lost to Wales (1:3) in Belfast on April 27, 1889, the Irish centre forward was James Campbell Percy (15.2.1869-26.10.1928). The intelligent Belfast YMCA player, who also was talked about off the pitch, would later be knighted and become deputy governor of Dublin. During this match, the legendary “Olphie” Stanfield opened the score for Ireland in the first minute of play, thus scored the fastest goal at a full “A” international in Irish history.

No draws allowed in Denmark

In the DBU (Danish FA) league, matches that remained drawn at the end of normal time were extended. If the tie still was not decided after the extra 30 minutes, the match was disregarded in the statistics and had to be replayed. It was not until 1899 that this odd rule was changed to the effect that the match no longer needed to be replayed and the draw was accepted after the extra time as an official result.

The Scottish Gordon Highlanders Regiment, which had been transferred to Belfast, included many good footballers and fielded a strong team which participated at the Irish Cup. In 1890 the soldiers team surprisingly beat Linfield (2:1) in the semi-finals, managed a 2:2 draw with Cliftonville FC (Belfast) in the final, and then won the replay (3:0). Thus did 11 Scottish soldiers bring the Irish Cup trophy to Scotland. The best of these, centre-half Robert George Milne, stayed in Belfast, took on Irish citizenship and later played for Ireland.