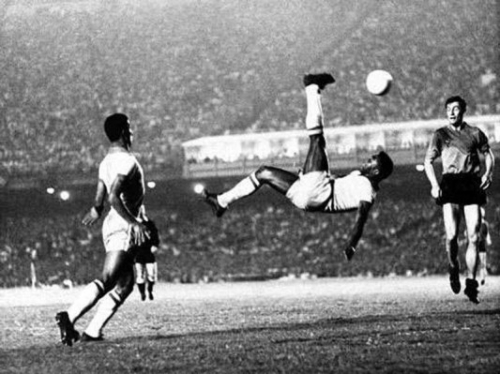 PELE AND HIS 10 UNBEATEN RECORDS

Pele's 10 records that survived himselfDuring his exceptional career, Pelé set a huge number of records of all kinds. Some of them were beaten during his lifetime, but many remain intact to this day.1.World champion - 3 timesPelé is still the only footballer to win the World Cup three times. This record is unlikely to be even repeated (let alone broken) in the foreseeable future. Brazil with Pelé was the dominant football nation in the world. Now the competition in the World Cup is much stronger: the last 6 editions were won by 6 different countries.2.Youngest goal-scorer in World Cups - 17 years 239 daysSo far, no football player other than Pelé has managed to score in the World Cup while being under 18 years old.3.The youngest player to score a hat-trick at World Cup - 17 years 244 daysIt is hard to imagine that another wonderkid will appear, capable of such a feat.4.Youngest player and goal-scorer in a World Cups final - 17 years 249 daysHis youthful feat since the 1958 World Cup has not been repeated by anyone.5.Goal-scorer in most World Cup finals - 2This record is shared by Pelé with 4 other players (Vavá, Paul Breitner, Zinédine Zidane, Kylian Mbappé).6.All-time top scorer of Intercontinental Cup - 7 goalsSince this tournament has ceased to exist, Pelé will remain its record holder forever.7.Top division league goals – 604 Among active players, Cristiano Ronaldo has the highest number of such goals, significantly lower than Pelé (498).8.Top level domestic goals - 659 Also in this category, all active players are still much behind (Lionel Messi is the best with 558 goals).9.All-time top scorer of Campeonato Paulista – 466 goalsAbout this record, we can safely say that it is eternal. None of the modern football players scored even 200 goals in Paulista.10.All-time top scorer of Brazil national team – 77 goalsNeymar has equaled this record during the World Cup in Qatar and will probably beat it next year.