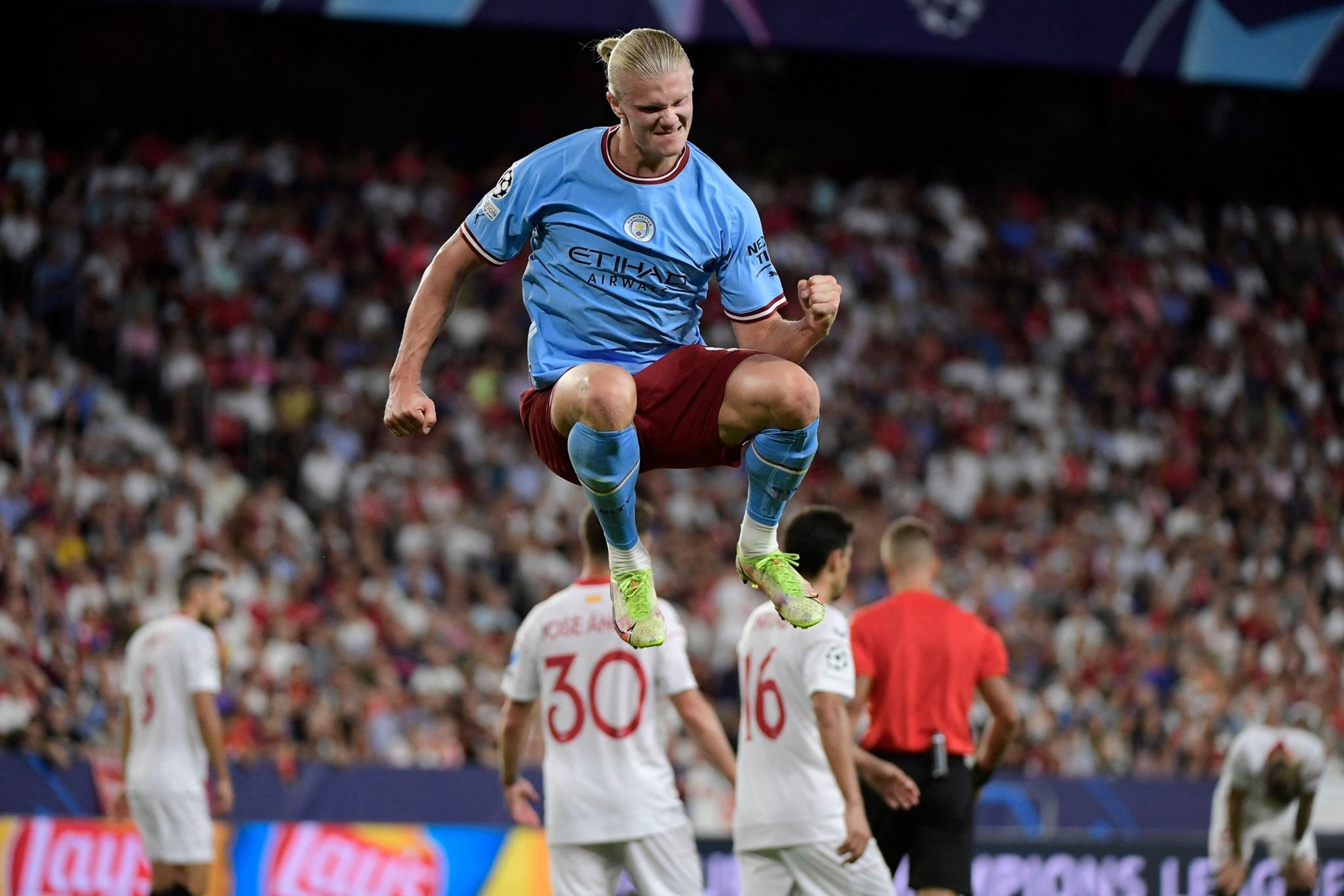 Statistics on Champions’ League group stage round 1 (September 6)*Erling Haaland who scored 2 goals for Manchester City vs Sevilla (4-0) became the 4th player in UEFA Champions League history to score at his debut for 3 different teams (also Salzburg and Borussia Dortmund). Others are Fernando Morientes, Javier Saviola and Zlatan Ibrahimovic.Moreover, Haaland scored at least 2 goals at each of his club debuts.*It was third game vs Sevilla in Champions League for Haaland; in every occasion he made a brace (total 6 goals). Only 3 other players in UCL history managed to score so many braces against the same opposition: Wayne Rooney, Cristiano Ronaldo and Lionel Messi. Cristiano Ronaldo is the only one to do it 4 times (against Bayern).*Haaland completed 20 games in Champions League and scored 25 goals in them. Cristiano Ronaldo, all-time best goal-scorer of the competition, has scored 0(!) goals in his first 20 games. *Haaland reached 30 top-level goals in 2022 to become third player in the world to do so, after Kylian Mbappé (36) and German Cano (31).*For Sevilla coach Julen Lopetegui this is joint-heaviest home defeat in his 19-year long coaching career, along with that vs Chelsea, also 0-4, on 2 December 2020.*Sevilla suffered two consecutive losses at home with 3+ goal margin (0-3 vs Barcelona, 0-4 vs Manchester City) for the first time since October 1948 (0-3 vs Espanyol and 1-5 vs Real Madrid).*Kylian Mbappé has scored for PSG vs Juventus (2-1) has scored his 5th Champions League goal within the opening 5 minutes; only Lionel Messi has done more such goals (6).*Lionel Messi has started his 19th season in Champions League, Only Iker Casillas played in more seasons (20). Cristiano Ronaldo, also with 19 seasons, is missing this campaign of the competition.*Chelsea (0-1 vs Dinamo Zagreb) have lost 3rd consecutive away game in all competitions for the first time under Thomas Tuchel.*Real Madrid (3-0 vs Celtic) won all 6 first games of the season in all competitions for the 6th time in their history; the previous time it happened in 2016-17 under Zinedine Zidane.*Modric made his 100th Champions League appearance for Real Madrid. Now the club has 8 players who reached this mark; also Iker Casillas, Raul, Sergio Ramos, Karim Benzema, Roberto Carlos, Marcelo and Cristiano Ronaldo.*Jude Bellingham (Borussia Dortmund) who scored vs Copenhagen (3-0) became the first English player with an age below 20 to score in 3 different Champions League seasons.