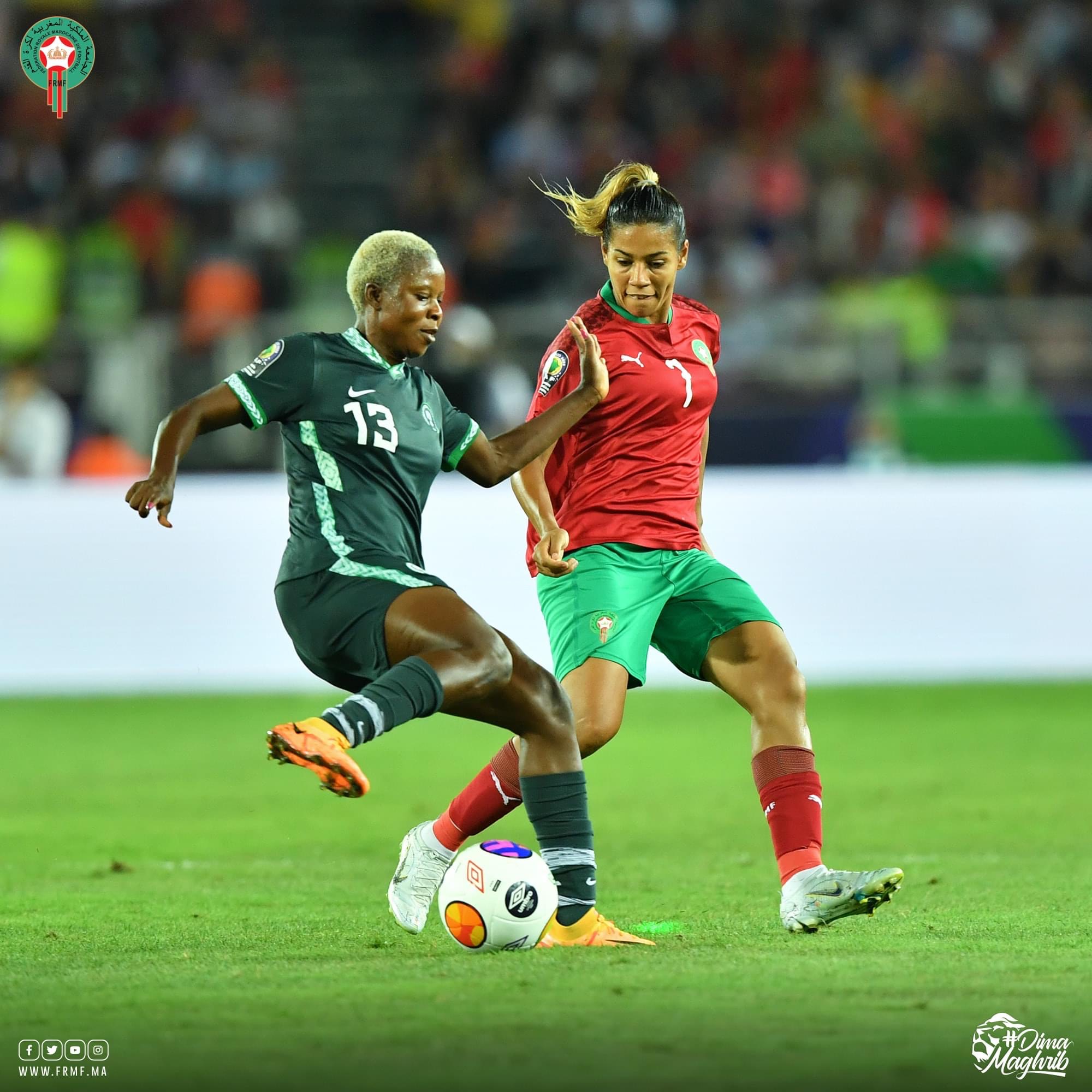 The two teams obtained the coveted visas this Monday night after two riveting semifinals in Casablanca and Rabat, respectively. Next Saturday’s final is historic as it will be the first such head-to-head, Morocco getting there for the first time and South Africa doing so for the fifth time, never having won any before.

45 562 spectators for the semi final between Morocco and Nigeria ! An incredible crowd sets the NEW RECORD FOR ATTENDANCE AT AN AFRICAN WOMEN'S FOOTBALL GAME !

The first to qualify were the South Africans who edged the Zambians 1-0 at the Mohammed V Stadium in Casablanca. The eventual losers kicked off the game shutting down almost every avenue to a scoring possibility for their opponents. They displayed better mastery of the game, only falling short of taking a deserved lead in the first half. But then a VAR check that invalidated a 58th minute penalty for South Africa ultimately validated one after Martha Tembo body-checked Jermaine Seoposenwe in the box. Linda Motlhalo shot from the spot to give South Africa the 1-0 lead in the 4th minute of stoppage time. That was their qualification as Zambia got a consolation in the Woman-of-the-Match award given to their captain Grace Chanda.

An impressive turnout of Moroccans at the Prince Moulay Abdellah Stadium, Rabat transformed the venue into a cauldron when the host nation battled defending champions, Nigeria for the last final appearance ticket. It was experience versus exuberance at its best. But then two red cards shown Nigeria during the game logically tilted the balance in favour of Morocco. But each side had their moments of glory. First, it was in the 62nd minute when following a cross from the flank by Rasheedat Ajibade, a combination between Ngozi Okobi and Uchenna Kanu saw Yasmin Mrabet score an own-goal. And in the 66th minute, Chiamaka Nnadozie dived to parry a cross by Rosella Ayane but on-watching Sanaa Mssoudy mistressly finished the job as she found the net at close range. Questions were however raised as to why the red cards shown Halimatu Ayinde and Rasheedat Ajibade for stepping on the ankles of their opponents in the 48th and 71st minutes, respectively not been shown equally to Fatima Tagnaout for the same offense. In the penalty shootout,  Morocco prevailed 5-4 when Yasmin Mrabet, Ghizlane Chebbak, Zineb Redouani, Nesryne El Chad and Rosella Ayane all found the net. Nigeria got goals through Rita Chikwelu, Regina Otu, Ashleigh Plumptre and Gift Monday. Only Ifeoma Onumonu faltered as Khadija Er-Rmichi stopped her kick. A tearful goalkeeper Chiamaka Nnadozie got the Woman-of-the-Match award for her brilliance at goal after the two red cards pierced the bowels of hell and Moroccan assaults came raining. Nigeria will face Zambia in Friday’s bronze medal match ahead of Saturday’s final between Morocco and South Africa.

Meanwhile, 24 hours before the semifinals, Cameroon and Senegal rekindled hopes for a World Cup qualification by defeating Botswana 1-0 and Senegal overpowered Tunisia 4-2 in penalties after a 0-0 play. The two games qualified them for two Africa places for the confederations play-offs for next year’s finals.