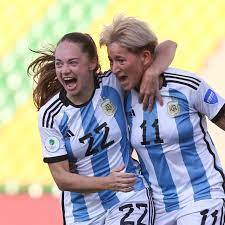 With a hat-trick by striker Yamila Rodríguez, Argentina defeated Uruguay 5-0 on Friday in a match corresponding to Group B of the Copa América Femenina, which took place at the Centenario stadium in Armenia. The “Albiceleste”, who had just thrashed Peru 4-0, confirmed their recovery after the initial defeat against Brazil with a hard-fought win. The defensive system of the "Celeste" had resisted but Estefanía Banini received a long pass inside the area and defined with quality at 43 minutes. In the second half, Uruguay advanced their lines in search of a tie, but the modification was used by Argentina to liquidate the counterattack. At minute 51, the exhibition of Yamila Rodríguez began, who put together a combination with Banini to sign a great bill. The forward of Boca Juniors increased her account to 64 after taking advantage of an error in the departure. She realized the hat trick at the 69th minute, before that Eliana Stabile scored the last goal for Argentina in the extra time.