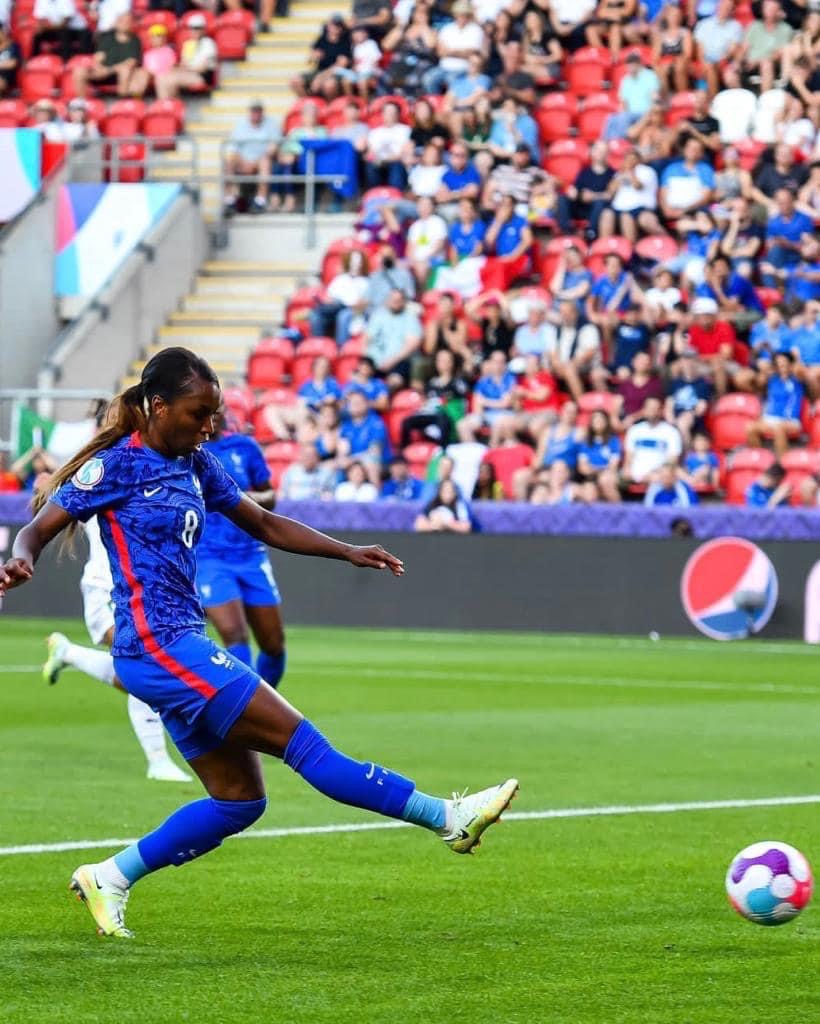 Picture : Grace Geyoro scored a hat trick in the first half time. Nobody made it in the EURO History !

FRANCE LAUNCH THEIR EURO IN STYLE !

If France realized a great game to win 5-1 for his entry in the EURO 2022, It was Italy who even had the first big chance of the game when France goalkeeper Pauline Peyraud-Magnin produced a stunning stop to turn Barbara Bonansea’s powerful shot behind. Grace Geyoro opened the scoring on nine minutes when Italy captain Sara Game failed to clear and the Paris Saint-Germain midfielder swept home a loose ball in the box. Italy gave the French another gift three minutes later when goalkeeper Laura Giuliani dropped a cross at the feet of Marie Antoinette Katoto to roll into an empty net. Katoto hit the post and Delphine Cascarino failed to connect with the goal as the chances continued to flow for France.

Soon the goals did too as Delphine Cascarino drilled a wonderful shot from outside the box into the bottom corner. Katoto then played provider by picking out Geyoro’s perfectly timed run and she kept a cool head to round Giuliani and slot into the empty net. Geyoro completed her hat-trick before the half-time whistle with another composed finish from Sandie Toletti’s assist.  France have never made it beyond the quarter-finals of a women’s Euro. However, they produced the most complete performance of the first week of the tournament to send out a message to all favorites. Italy did restore some pride in the second period and reduced the deficit through Martina Piemonte’s towering header.

Picture : Sveindis Jonsdottir was the Player of the match Iceland - Belgium.

In the second game of the Group,  a 1-1 draw between Belgium and Iceland earlier in Manchester gave the opportunity to each team to be able to play for the second place . Iceland were left to rue a missed first half penalty at when Berglind Thorvaldsdottir’s spot-kick was saved by Nicky Evrard. Thorvaldsdottir made amends by heading in at the back post early in the second half. However, Belgium did take their chance when given a penalty 23 minutes from time as Justine Vanhaevermaet coolly converted. Iceland are back in Manchester for their next game against Italy on Thursday, while Belgium face France in Rotherham.