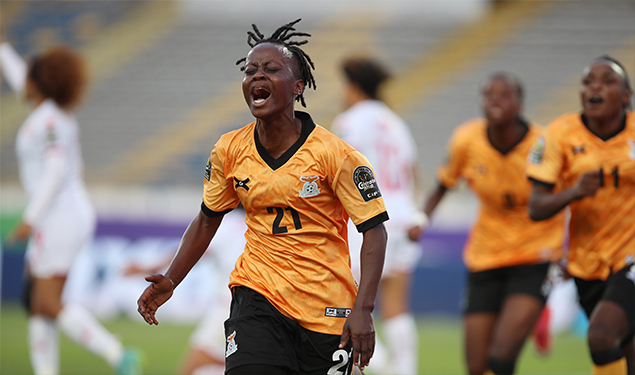 Surprise results defy predictions on day-2 of WAFCON group B.

It was predicted that Tunisia would, at worse, pull a draw with Zambia,  and Cameroon dispose effortlessly of Togo. But at sunset, Wednesday night, the predictions found no favour with the gods of the African game. It took 92 minutes for Zambia effort sustained throughout the game to be vindicated. At that point in time, Lushomo Mweemba took a free kick some 40 metres away for Grace Chanda to head onto Avell Chitundu's path who finished off the excellent keeper Soulayma Jebrani at close range for the lone goal. They had earlier been deprived of celebrations twice: when Lubandji Ochumba shot wide a penalty after Rania Aouina roughly tackled Xiomara Mapepa in the box, and when VAR checking invalidated a 67th minute goal scored when Xiomara Mapepa's free kick sailed through behind the net. The victorious Zambians could have enjoyed a much heavier margin had they not met the resilience of the outstanding goalkeeper  Soulayma Jebrani who justifiably earned the Woman-of-the-match award.

Koudjoukalo Sama (13), the woman of the match Togo - Cameroon.

In the second game, Togo came onto the pitch with the odds firmly against them for having lost their first game 1-4. But then the psychological adversity rather proved to be a weapon as they threw in their very best and earned a penalty after a VAR check rated the attempt by Cameroon keeper Ange Bawou to clear an airborne litter punishable. For fouling Odette Gnintegma the keeper earned a yellow as well. Auxerre forward Afi Woedikou shot from the spot to make it 1-0 in the 28th minute. Cameroon equalizer came in the 40th minute when defender Estelle Johnson headed the ball past keeper following an indirect free kick taken by Aboudi Onguene after Nchout Ajara had been fouled off the edge of the box. The second half only noted a concentration of play in the Togolese half as Cameroon vainly pressed hard to carry the day. At full time, it was a Togolese side celebrating an unprecedented and highly unexpected draw with the highly rated Cameroon team. Togolese 13-shirted player, Koudjoukalo Sama took the Woman-of-the match award.Group C comes back to duty this Thursday with South Africa vs Burundi at 6 p.m. and Nigeria vs Botswana at 9 p.m.