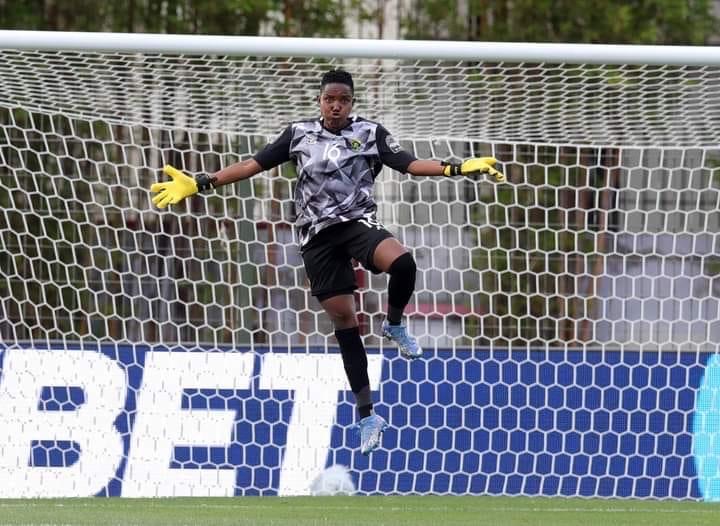 A total of nine goals were scored Monday in two matches of different technical levels marking day-1 of the 2022 WAFCON. While the clash of the heavy weights closed on a slim margin, that of the debutants excelled in exciting moments celebrating goals.

CAF President Patrice Motsepe bestowed broad smiles as his home team perturbed the serenity of the Super Falcons, scoring two goals in quick succession in the group C clash of the titans in Moulay Hassan FUS in Rabat Monday night. The heavily built Nigerians got a surprise package from the relatively diminutive South Africans whose determination getting into the first half was reflected in their three corner kicks as against none. Two attempts by Asisat Oshoala, one on 28 minutes and a second on 49 minutes, with keeper Andile Dlamini standing her grounds meant the South Africans were determined to ward off every Nigerian intrusion. Cometh the moments of truth on 61 and 63 minutes, respectively…Jermaine Seoposenwe received an oiled pass following an athletic footwork by Noxolo Cesane to slip the ball under the diving keeper Tochukwu Oluehi. There was no time for the Falcons to rally from the discomfiture as in the following minute Jane Refiloe served a through ball for Hildah Tholakele to hammer with the left foot past the advancing keeper. It could have reached a 3-0 had keeper Tochukwu Oluehi not rushed out of the box to foul Melinda Kgadiete set for the kill. However, defending champions, Nigeria pressed hard to find the net on 92 minutes after Rasheedat Ajibade transfixed Andile Dlamini with a low left foot drive. As South Africa fed fat on an ancient grudge after they lost to Nigeria in the 2020 final in Ghana, Linda Mothalo of South Africa lifted the Woman-of-the-Match award.

In the second match, Botswana and Burundi gave fans the impression that they were not only debutants in the tournament but in the game as well as they served an insipid and unentertaining first half until just a minute to the break. It was Keitumetse Dithebe who demonstrated rare technical skill before curling the ball in a volley past the keeper to the top left for the opener. Two minutes into resumption, they increased tally when Lesego Radiakanyo slammed in a cutback from the left flank by Refilwe Thokalele. Burundian reaction came in five minutes later courtesy of Sandrine Niyonkuru who batted in a block by the goalkeeper. Refilwe Thokalele took the scores to 3-1 with a sumptuous diagonal shot from just outside the box. The scorer went on to make it a brace on 60 minutes following a comprehensive combination upfront . And then, in what seems to be the goal of the first round,  Sandrine Niyonkuru instantaneously connected a volley on 81 minutes ricocheting on the crossbar before finding the back of the net. At the end of the game, Tswanan, Refilwe Thokalele won the Woman-of-the-Match award.

This Tuesday, group A comes back to action at the Prince Moulay Abdellah Stadium in Rabat with the fixtures, Burkina Faso vs Senegal at 6 p.m. and Uganda vs Morocco at 9 p.m.