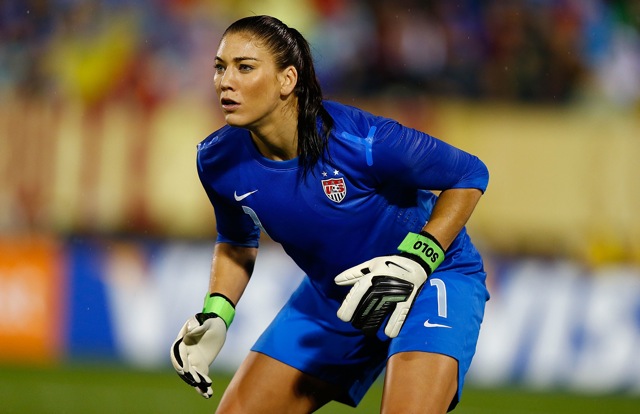 Editioral staff and experts from 70 countries from all the football continents took part in the second running of the IFFHS annual election of The World’s Best Woman Goalkeeper 2013.

The American Goalkeeper Hope Solo (32 years old) could defend her title from 2012 after a great competition with the German Nadine Angerer. Hope Solo had a difficult year. In March 2013, she had to perform surgery her left wrist, she missed also the traditional Algarve Cup in Portugal with the US National Team and fall out for three months.

Her strong comeback in summer with the Seattle Reign FC in the National Women Soccer League and after , with the USA Team ,added to  her great  presence and her fantastic personality ,made it possible to beat with a little advance the German Nadine Angerer (35). The Goalkeeper of 1 FFC Frankfurt and today from Brisboane Roar leaded the German national team to the European Championship. Angerer only got one goal in the whole tournament and in the final she holded fantastically two penalties against Norway. She got the award for the Player of the European Tournament, but she was beaten for this IFFHS World title, six points behind Hope Solo. Third, Stina Lykke Petersen (27) played also a great European tournament in Sweden. Petersen, who plays in Duisburg since summer, was Denmarks number 1 and due to her performance, Denmark rushed until the semi-finals. The Arsenal Goalkeeper Emma Byrne (34) edges the 4th place before the second German Almuth Schult, the 22 years old goalkeeper from UEFA Women Champions League winner Wolfsburg, who symbolize the future.