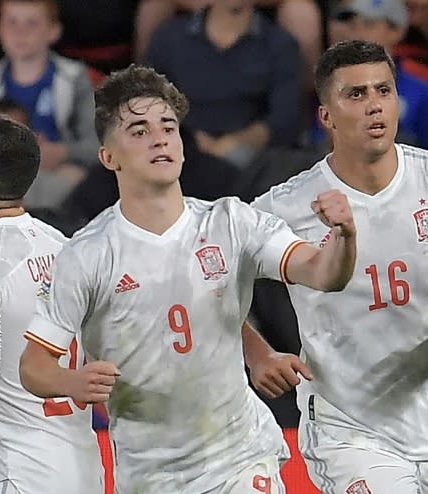 Picture : Pablo Gabi (here with Pedri on the picture) became the youngest Goal Scorer in the History of Spain !

Statistics on international games of 4-5 June*Wales won a World Cup qualifying playoff game vs Ukraine (1-0) and thus established new record of the competition: the longest gap between two appearances in the final stage of competitions qualifications for a World Cup tournament. Wales appeared there for the last (and only) time in 1958 (64 years ago). The previous record (56 years) belonged to Egypt (1934 and 1990) and Norway (1938 and 1994).*Ukraine had 9 shots on target in this game: the most by a team without scoring during a game in the whole 2022 World Cup qualifying campaign in European zone.*Cristiano Ronaldo, with a brace in the Nations League game Portugal vs Switzerland (4-0), extended his world record to 117 goals for his national team.*Germany failed again to beat Italy in a competitive game (1-1). “Scuadra Azzurra” is still unbeaten in this rivalry in non-friendly matches (6 draws and 4 wins in 10 occasions).*England, suffering a defeat 0-1 from Hungary, ended their 22-game unbeaten series which lasted since 15 November 2020 (2-0 vs Belgium). It was longest such streak in the 150-year history of “Three Lions”.*Hungary beat England for the first time since May 1962 (when they won 2-1 at World Cup group stage). Their winless run against England over those 60 years counted as many as 15 games. *Republic of Ireland (0-1 vs Armenia) are still winless in Nations League (5 draws 6 losses in 11 games). They have scored only 2 goals in those 11 games: 2nd worst result among all European countries in this competition, after San Marino (no goals).*Czech Republic (2-2 vs Spain) have prolonged their unbeaten series in home games to 11, just one from their longest ever (12 games in 1997-2000).*Spain have never yet lost against an opponent who wore all red (like Czechs in this game): 16 wins and 4 draws in 20 such games.*Pablo Gavi became the youngest goal-scorer in the history of Spanish national team (17 years 304 days), surpassing Ansu Fati who scored in the Nations League game vs Ukraine (4-0) in September 2020 at the age of 17 years 311 days.  *Norway have beaten Sweden (2-1) in a competitive match for 3rd time in the history of this Northern Europe rivalry (and for the first time as visitors), after 3-1 win in September 1967 (Euro qualifier) and 2-1 win in September 1977 (World Cup qualifier).*Argentina (5-0 in the friendly vs Estonia) is always closer to the record of Italy (37 unbeaten games in a row in 2018-2021). “Albiceleste” has 33 games now; 4th such streak in the football history (Brazil in 1993-1996 and Spain in 2007-2009 had 35 games).*Argentinean midfielder Rodrigo De Paul has equaled the best personal streak of consecutive games without losing (31) in the history of Argentina national team, established by Óscar Ruggeri between February 1991 and August 1993.