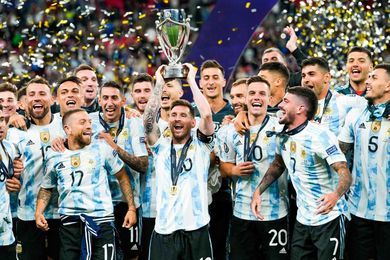 Statistics on international games of 1-3 June*Beating Italy 3-0 in Finalissima, Argentina achieved the best streak of consecutive games without losing in their history (32). “Albiceleste”  surpassed the 31-game streak made under "Coco" Basile between 1991 and 1993. They are already 5 games away from equaling the world record of Italy (37).*Ukraine, beating Scotland away 3-1 in World Cup play-off qualifier, have ended their 12-game unbeaten streak at home. It was their longest such series since 1978 (16 games).*Scotland have failed to qualify on World Cup for 6th time in a row. Their last appearance was at the 1998 edition. Between 1974 and 1998 they missed only one of 7 tournaments.*A draw between Spain and Portugal (1-1) in the League Nations game became 5th consecutive in this rivalry. It is the first case in the history of Spanish national team with so many tied games in a row against the same opponents.*Also, Portugal is the first opponent to hold 6 consecutive games (all draws) without losing as a visitor vs Spain. “La Roja” hasn't beaten Portugal at home since 1958 (1-0 in Madrid, goal by Di Stéfano).*For Cristiano Ronaldo, this game was 187th with Portugal. Only 2 players in the history have had more caps (Soh Chin Ann 219, Bader Al-Mutawa 192).*Cristiano Ronaldo started on the bench just for the 2nd time in almost 14 years when he was called up for a competitive Portugal match, after a World Cup qualifier vs Andorra (2-0) in 2017.*For the first time in history France failed to beat Denmark at home (1-2 in League Nations game). All previous 6 games ended up with a France win.*Belgium (1-4 vs Netherlands) suffered their biggest home defeat since 1-4 vs Morocco in 2008. They were 42nd in FIFA Ranking at that day. Now they are 2nd.