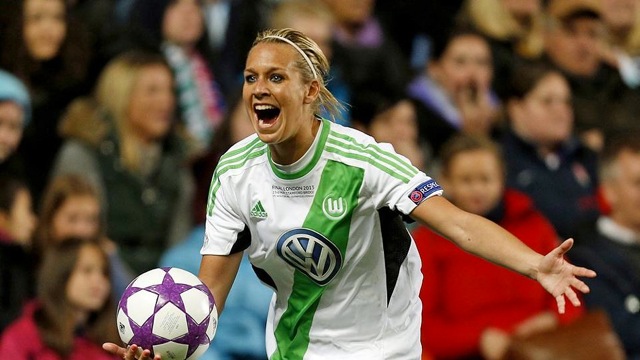 Editorial staff and experts from 70 countries from all the Football continents in the World took part in the second running of the IFFHS annual election of The World’s Best Woman Playmaker 2013.

After the Brasilian Marta who won the first award for the World’s Best Playmaker 2012, now the german Lena Goessling owns the first place. The 27 years old midfielder from VFL Wolfsburg played a fantastic saison and celebrated with the German National Team the European Championship 2013.

With her team she won the Triple in one season: the German Championship, the German Cup and as highlight the UEFA Champions League. Lena Goessling is the regulator of her club team and in the national team, so is  she also nominated in the 3 best European players of the year.

Behind Goessling, Camille Abily, (29 years old) the French lady from Olympique Lyonnais took the second place after an excellent season with her team, except the final of the Champions League against Goessling and Wolfsburg. Abily won two titles in France and has been a great leader for her team. At the third place, Dzsenifer Marozsan showed especially at the European Championship in Sweden that she can despite to her young age (21) a leader and that she can hold out big pressure in difficult situations. At the fourth and fifth places there are two more great players from Olympique Lyonnais.

French Louisa Necib and Lara Dickenmann from Switzerland belong since years to the most important players in Lyon and are fantastic technicians. Besides Dickenmann (28) is also the great leader of the Swiss National Team, who has a real chance to qualify the first time for a big tournament.