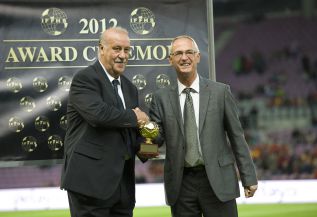 Selected editorial staff and experts from 70 countries and from all the football continents took part in the 2013 election for the World’s Best National Coach, held annually by IFFHS since 1996. The “Top 9″ is composed of 7 different nationalities with only Argentina (2) and Germany (2) represented more than once.

After many titles as player with Real Madrid CF, he trained this club in three periods and won also European and Spanish titles. Friendly, reserved and conscientious he has been the National Coach of Spain since 2008 and won the World Cup 2010 and the Euro 2012. The World Cup 2014 is his next objective. The German Joachim Löw, who has coached the German National Team since 2006 after the World Cup and Jürgen Klinsmann, was second in the ranking of the year 2013 he confirmed his regularity and the attractive football of his team. He is in the Top 5 of the national Coaches for the 6th time in 7 years and he is only 53 years old!

The Brasilian Luis Felipe Scolari has built a team to win the World Cup 2014 in his country, Brasil, and he made a first step with the Confederation Cup. The experience of Scolari (65 years old) gives him the power to take the second and greatest step. Behind him, the new generation is represented by Marc Wilmots (44 years old). He played 70 times with the Belgium National Team, was the assistant coach of the National Team since 2009 before his nomination in 2012 to be the Coach of Belgium’s National Team. With a fantastic generation of players, he brought Belgium to the Top 10 in the World.