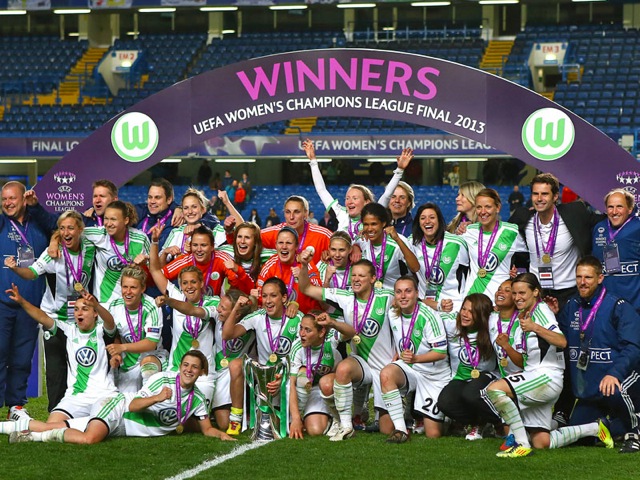 Editorial staff and experts from 70 countries from all football continents in the World took part in the second running of the IFFHS annual election of The World’s Best Woman Club 2013 to designate the successor of the first winner Olympique Lyon.

It came as no surprise that the VfL Wolfsburg won the title of The World’s Best Woman Club 2013. The German team had a fantastic year 2013 and celebrated the TRIPLE. The team of Ralf Kellermann was the best team in Germany, won the Championship and also the Cup. The big surprise succeed for Wolfsburg in London at the end of May, the German women defeated the title-holder Olympique Lyonnais in the final of the UEFA Champions League with a penalty scored by Martina Müller.

Lyon never lost before in 95 games! This game in London made the decision for the title of The World’s Best Woman Club of the year, because if Lyon had won, Lyon would have celebrated the TRIPLE. But the defeat in the final gave Olympique Lyonnais the second place. The French team of Patrice Lair won Championship and Cup in France and was surprised by Wolfsburg in the final. It was a shock for the partners of Louisa Necib, as they had also been eliminated by another German team Potsdam in the UEFA Champions League this year! Thorns FC de Portland was third. The American team with Alex Morgan won the final of the championship in the National Women’s League Soccer after a third place in the regular saison. Behind the Arsenal ladies and Torres Calcio, the Italian Champion and Cup-holder took the fourth and fifth places.