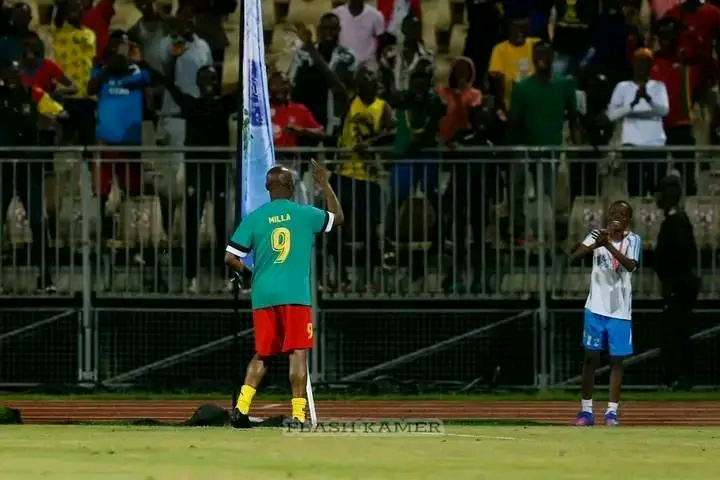 The oldest man to score a goal at the FIFA World Cup,  Albert Roger Milla has declared that he would never again play football. He made the statement at the end of a gala match in Yaounde Saturday to celebrate his 70th birthday. The match which pitted a selection of world legends in the likes of Mark Fish, Youssouf Fofana, Tresor Lualua, El Hadj Diouf, Samuel Eto'o, Halidou Fadiga, Alioum Boukar, Achille Emana, Nchout Ajara and others against Cameroonian legends in the likes of Joseph Antoine Bell, Geremi Njitap, Timothee Atouba, Ndip Akem, Stephane Mbia, Roger Milla and others ended in a 6-2 margin for the former. Milla who played for less than five minutes scored a goal before running towards the corner flag to celebrate with a less vigorous version of the wiggle he used to celebrate each of his 4 World Cup goals in 1990 and the lone one in the USA '94 finals.

Named Africa Player of the Millennium by CAF in 2007, Milla played in 3 editions of the FIFA World Cup including a 1/4 final appearance in 1990; played a total of 747 matches, scoring 413 goals, 43 of which he scored for Cameroon in his 77 appearances therein from 1973 to 1994. He moved to France in 1975 at the start of his professional career after stints locally with Eclair and Leopard, both of Douala, and Tonnerre Yaounde. Twice Africa Golden booth(1976 and 1990) Roger Milla flew into the country in 1976 from France and vouched to score 3 goals the next day against Guinea Conakry winners in the first leg of an AFCON qualifier 4-1. He did but went on to shoot wide in the post match penalty kicks and Cameroon was eliminated. At the end of the gala match on Saturday,  he declared he would never again play football. He had once retired from the game but came out of retirement to bath in the steam of competitive football with his participation in the 1990 World Cup finals.