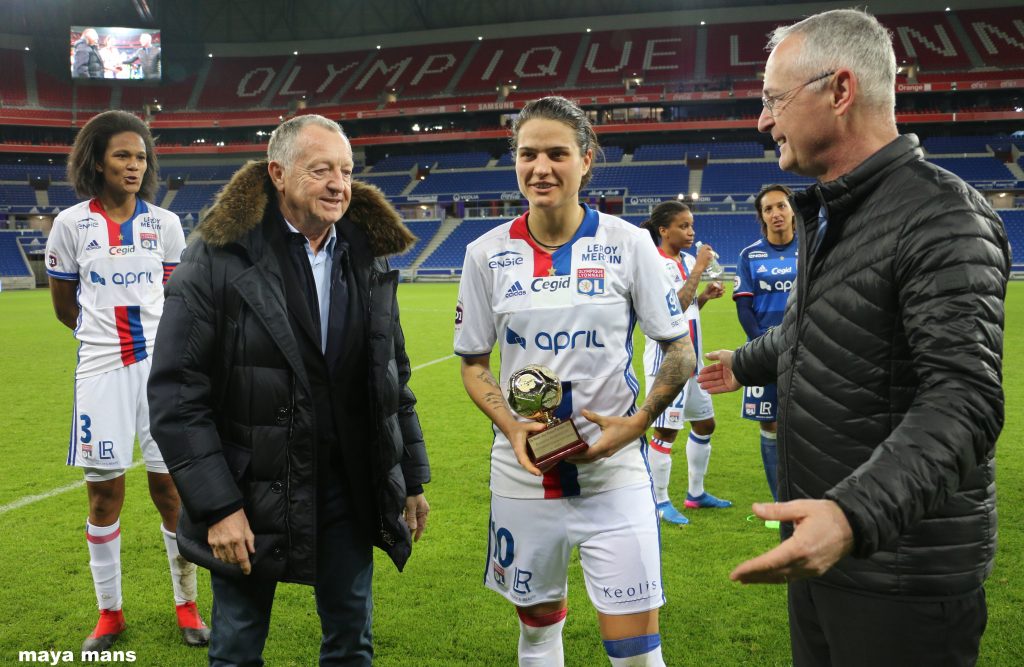 Picture : Jean-Michel Aulas, President of Olympique Lyonnais and the team with Dzsenifer Marozsan, receiving the IFFHS Award 2016 in Lyon

Dzsenifer Marozsan, born 18 April 1992 in Budapest (Hungary), is considered as the World’s Best Woman Playmaker of the last decade (2011-2020). She plays always for Germany at the international level and for Olympique Lyonnais in France for the national and international club competitions. She is the only one to have won two times the Award (2016, 2018) of THE WORLD’S BEST WOMAN PLAYMAKER by IFFHS.

Born in Budapest, Dzsenifer Marozsan moved with her family to Germany in 1996, her father was professional and international Hungarian. She began her career in DJK Burbach with boys teams before to join the youth team of 1FC Saarbrücken (2003 to 2007). At 14 years and  months, she made her debut in the German Bundesliga with Saarbrücken and was naturalised German. She holds always the record of the Youngest Bundesliga Goal Scorer at 15 and 4 months. She played 43 matches with Saarbrücken in two years and scored 16 goals, winning the 2.Bundesliga title 2008/09 and being runner-up of the German Cup in 2007/08.

Since the creation of the IFFHS Women Awards in 2012, Dzsenifer Marozsan was always ranked in the Top 5, winning two Awards of THE WORLD’S BEST WOMAN PLAYMAKER in 2016 and 2018 ! She was also crowned France Ligue 1 Best Player all 3 seasons since 2016 and Woman Footballer of the Year in Germany the 3 last years ! She was nominated in all the All Star Teams of the Year in FIFA, UEFA and IFFHS , being considered as the World’s Best Playmaker of the Decade. And she is only 28 !