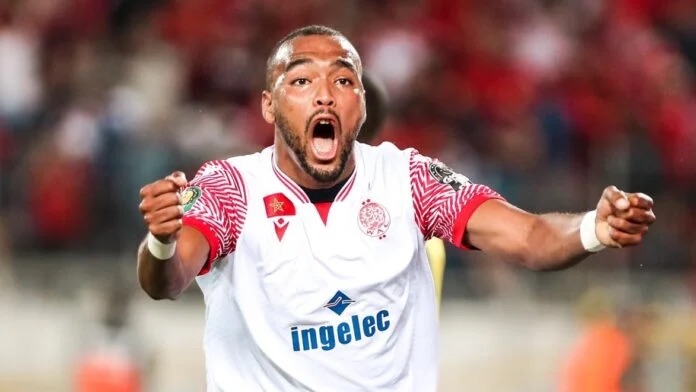 Picture : Amine Farhane scored for Wydad to secure the place in Final !

Stepping into the boisterous Mohammed V football setting Friday  night, Petro de Luanda had the odds against them after having lost at home in the first leg 1-3. They therefore opted for outright attacking football that saw Gleison Moreira finding the net with a 21st minute left foot strike from just outside the box. The reply came in 7 minutes on through a header in a goal mouth melee courtesy of defender Amine Farhane. The mathematical domination by Petro, 15 shots with 6 on target as against 8 and 2, respectively for the hosts , as well as a 58% possession against 42% were not good enough to redeem Petro reduced to 10 men when Adriano Belmiro 'Yano' took a red card in the 5th minute of stoppage time of the game. Wydad AC predictably sailed through to the final with 4-2 aggregate situation.

An attempt by ES Setif to turn the tables at home against Al Ahly against whom they had lost 0-4 in the first leg semifinals were promptly stifled when Ahmed Abdel Kader found the net as early as the 2nd minute of the game. Excitement seemed to come back at the Stade de 5 juillet when Ahmed Kendouci drew level at the stroke of the interval. The hosts went ahead to take the lead in the 61st minute through Riad Benayad. The expectations were rife as the hosts fired 17 shots with 5 on target as against 6 shots and 2 on target. With a par struck in an 84% success rate in pass accuracy, and ES Setif obtaining 5 corners as against 1, but with a slightly lower possession of 49% against 51%, it still did not prove potent enough for them to produce an offset. Rather, Mohamed Sherif drew level in the second minute of stoppage time to send defending champions and 10-time winners Al Ahly to the May 30 final scheduled for the Stade Mohammed V in Casablanca.