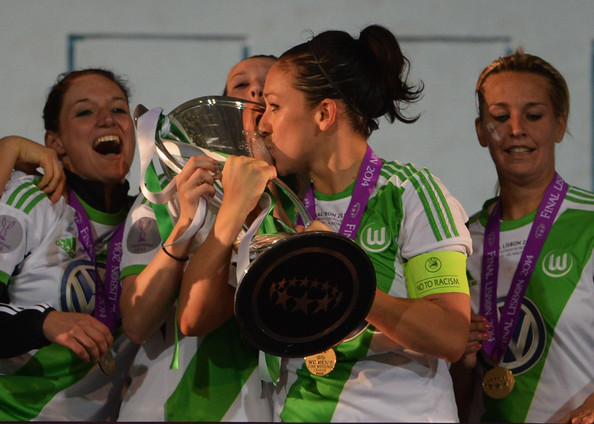 German players again took pride of place when Nadine Kessler and Lena Goessling were clear winners in the 2014 IFFHS Women’s Playmaker of the Year. Both play for the world’s top women’s club, VfL Wolfsburg, leader of the Bundesliga and two time consecutive Champions League winner, with Kessler edging ahead in the final count from experts in more than 60  world wide countries to poll 105 points from team-mate Goessling who finished with 97.

Third place went to Louisa Necib (37 points) who plays for the top Franch club Olympique Lyon.  Brazil’s Marta had won the inaugural award 2012 and  Goessling was the 2013 winner. But it was the 26 years old Kessler, the 2014 FIFA World Player and 2014 UEFA Player who proved the year’s big success.

The Trophy was a fitting tribute to Kessler, who was captain of the German national team and her world top-rated club VfL Wolfsburg. Kessler and Goessling partnered effectively to take Wolfsburg to win the German Bundesliga as well as strong performances in the European Champions League. They work very well together with Kessler scoring many important goals.

French National team player Necib (27 years) improved her position during the year after finishing fourth in 2013. She is an accomplished technician and is showing gradual improvement each year. Team-mate Camille Abily and Caroline Seger from Paris SG, two experienced players, complete the Top 5 ahead of the USA girls, Christen Press and Amy Rodriguez, who have more ambitions in the future.

Germany was further represented in the Top Ten by Dzsenifer Marozsan (1. FCC Frankfurt) who was voted in 8th place, after a third rating last year but at 22 years old, she still has a great future ahead. 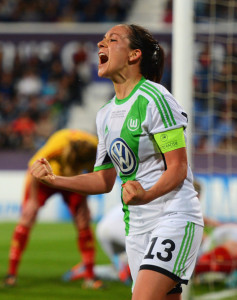 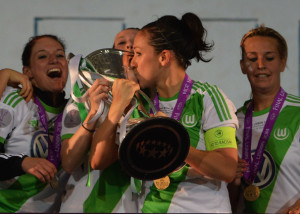