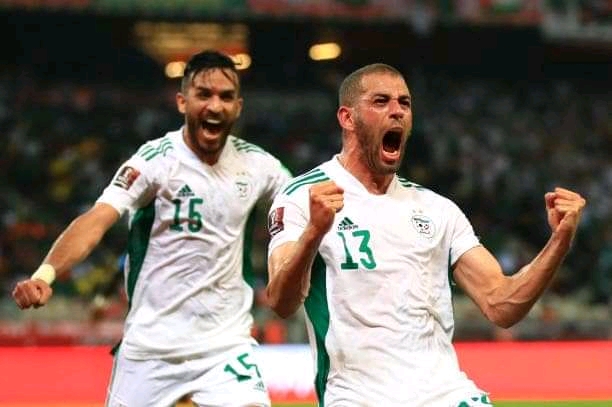 In the first game of the day, the Democratic Republic of the Congo received Morocco at Kinshasa’s Stade des Martyrs where the country’s president, Etienne Tshisekedi led an overflowing capacity crowd as they looked to fan the hosts to victory. Yoane Wissa bought the clarion call in the 12th minute when he closed in on the visitor’s box and sent the ball in a projectile to the keeper’s top left. At a golden moment to get the equalizer, En-Nesyri shot the ball wide from the spot. Cédric Bakambu had touched the ball following a 75th minute corner kick. Morocco bounced back with the equalizer coming in from Tark Tissoudali on 76 minutes. At 1-1, the chances are open for the next Tuesday’s game in Casablanca although Glodi Ngonda must be sidelined after taking a red card on 85 minutes.

Islam Slimani’s 41st minute header landed Algeria the first leg win and also Cameroon’s first loss at the Japoma Stadium in Douala. Captain Vincent Aboubakar led the Indomitable Lions in a blistering domination of Algeria allowing the Desert Foxes to cross the median only after 6 minutes of play. But the visitors whose defense tactic appeared productive quickly surged forward with an argument that almost gave them the opener had it not been for agile goalkeeping by Cameroon keeper André Onana. However, Islam Slimani’s exquisite header just before the half following an indirect free kick by Mohamed Youced dwarfed Onana’s attempt as more than 50 thousands went silent. It was the all-time Algerian leading scorer’s 40th goal, and his 8th in the CAF Qatar 2022 qualifiers. Deputy captain Eric Maxime Choupo Moting did not help lead the hosts on a comeback mission after injured Aboubakar was substituted at the half. Not even 11 minutes of stoppage time following outage from several floodlights during the half time period gave Cameroon the much needed equalizer ahead of Tuesday’s return game in Blida.

Off to the Stade du 26 mars in Bamako between hosts, Mali and visitors, Tunisia. The hosts bestowed plenty of determination to the delight of the particularly exhilarated home crowd that had trooped to the venue to occupy every seat. Tunisians too had their fair share of chances but were denied by the excellent keeper. But he would only be let down by defender Moussa Sissako whose back pass in the 36th minute beat the former for the own-goal to Tunisia’s advantage. Matters got worse for Sissako on 40 minutes when, as last defender, he tripped the attacker headed for the goal to take red. The Eagles fly to Tunisia on Tuesday to challenge their opponents without their Liege defender, and handicapped by predictions that don’t favour them.

In a duplication of the 33rd AFCON final fixture, Egypt welcomed Senegal at the inferno the  Cairo International Stadium is. Unlike the last February 6 game in which Senegal went through the shootout lottery to prevail, the hosts registered an all-important 1-nil victory. Actually, it was an own-goal discredited Ligue 2 Nancy’s Saliou Ciss as early as 4 minutes into play. The Senegalese side never recovered from that setback in spite of their outright domination in ball possession, thus setting the pace for a crucial clash of the titans at the newly constructed Abdoulaye Wade Stadium where the turnout next Tuesday will simply be an overflowing capacity.

The 5th game of the 1st leg of the playoffs pitted hosts, Ghana against Nigeria. The legendary West African football rivalry between the two was once more revised when both sides fought each other to a standstill as the scoreboard read 0-0 at full time. Both sides sparred in pass accuracy, but Ghana dominated in ball possession and sending 10 shots to the goal as against 7 after registering 9 corners as against 2 for Nigeria.. They shared the yellow card 1 apiece and closed activity in Kumasi literally inviting all and sundry for an encore at the Baba Yara Stadium on Tuesday.