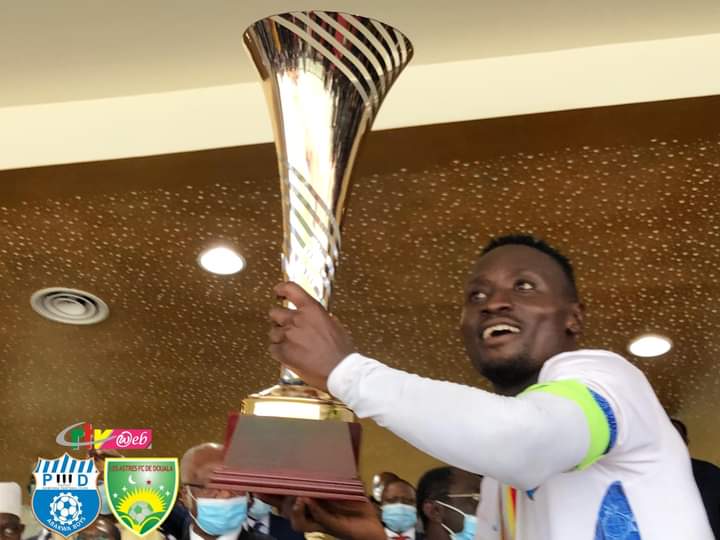 Getting into Sunday’s game marking the 2021 edition, the 60th this far, they had as slogan, “wiping the tears of 1979”. It was a matter of standing up where they fell 43 years earlier when they lost to Dynamo Douala 1-3 in their second Cup Final appearance. The first had closed on a 0-1 defeat to Canon Yaounde in 1967. Their slogan found essence when they defeated Les Astres Douala 1-0 in a final awaited for 8 months. Cameroon’s Prime Minister, Chief Dr. Joseph Dion Ngute, deputizing for the regular guest of honour at the annual final, President Paul Biya, was accompanied at the unpopular turnout by the members of the government he heads.

Public Works Department(PWD) Bamenda, winners of the 2020 National Professional League found a strong impetus in the acquisition of a brand new 49-seater bus by the elites of the restive English-speaking North West region where Bamenda is the chief town, and were given a 2:1 chance of prevailing in the game by an opinion poll published on social media. They lived true to it. Eventual mvp, Hubert Chem’s 15th minute direct free kick just outside the box after keeper Jourdain Mbaynassem had caught the ball beyond his operational jurisdiction landed the Abakwa Boys the victory and coveted trophy. Granted that referee Elouga Bikim ruled out a 26th minute potential penalty for Les Astres who had hoped to exorcise the ghosts that prevented them from prevailing in three earlier finals in 2007, 2009 and 2010. They had also banked on their 2 victories and 1 draw in three previous matches with PWD. But when captain Derrick Burinyuy received the trophy it was certain PWD were qualified as Cameroon’s 2023 CAF Confederation Cup representatives while Les Astres capitulated arms in hand.

It was a Sunday of mixed fortunes in all four groups of the TotalEnergies CAF Confederation Cup Competition.

Egyptian side, Pyramids FC booked their quarterfinal ticket from group A at the Stade Olympique de Radés, Tunis to reach the stage for the third time in a row. Their commendable effort from the start of the game paid off on 44 minutes as El Karti found the target from the edge of the box. Club Sfaxien’s Firas Chaouat headed home the equalizer for the hosts with just 8 minutes into resumption to put fulltime scores at 1-1. In the other group A match played at the National Heroes Stadium, visiting Al Ahli of Tripoli edged Zanaco FC 3-2. Ahly raised the curtains on 13 minutes through a penalty scored by El Fakih. Abraham Siankombo equalized on 35 minutes. Yet another penalty scored by El. Fakih on 63 minutes put the visitors ahead. McClive Phiri equalized on 82 minutes. And Sayed Husayn gave the visitors the winner 2 minutes into stoppage time of the game. Pyramids tally 10 pts, Al Ahly 9 pts, Club Sfaxien 4 pts and Zanaco 0 pt.

4 goals were scored in the two games of group B. Orlando Pirates trounced Royal Leopards 3-0 at the Orlando Stadium. All three goals were scored in the second half, courtesy of Fortune Makaringe on 47 minutes, Kabelo Dlamini on 56 minutes and Terence Dzvukamanja on 70 minutes. At the Stade du 5 Juillet Oussama Bellatreche scored a first minute goal for JS Saoura against Al Ittihad to grab 3 points. That was how the match closed leaving the group thus: Orlando Pirates 9 pts, JS Saoura 7 pts, Al Ittihad 7 pts and Royal Leopards 0 pt. With the Leopards out of contention, the group has settled for a 3-team tussle for two places.

In group C, Cotonsport and their fans collapsed into frustration when visiting TP Mazembe got a critical equalizer 5 minutes into the stoppage time of the game at the RoumdéAdjia stadium. The hosts took the lead twice but were caught up with each time. Cotonsport thus gravely compromised their chances for a quarterfinals berth, especially after the other group game played at the Borg El Arab stadium ended 1-0 in favour of hosts, Al Masry. In spite of  Hassan Ali’s goal on 83 minutes, Otoho are still hopeful. Group C stands at Al Masry 7 pts, TP Mazembe 7 pts, Otoho 4 pts and Cotonsport 3 pts.

The central defender at Liverpool, and in like duties when he sports the Cameroon shirt pioneered the award amongst his fellow countrymen at the end of February 2022 courtesy of a number of arguments: he played fulltime in all 4 Liverpool outings; scorer when his team trimmed Leeds to size 6-0, providing an assist in the game as well; and, with his fellow defenders took just one goal in February.

New Cameroon manager, Rigobert Song would certainly have loved to have the services of Joel Matip for the binary Qatar 2022 qualifiers against Algeria March 25 and 29 but the player  turned down the request, blaming the Cameroon federation for recurrent amateurism in the management of the national team. Matip, 31, has capped 27 times for Cameroon, playing the last time with the team in the 2014 World Cup in Brazil during which he scored a goal in their 1-4 loss to the hosts.