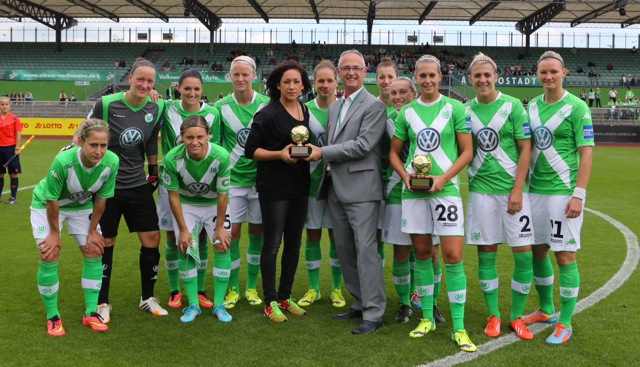 Multiple champion Vfl Wolfsburg has again run away from its opposition and defended its title to be voted by the IFFHS as the World’s Best Woman’s Club for 2014.

Wolfsburg has completed a sweep of championships in 2013 in winning the Bundesliga, the German Cup, the UEFA Champions League and the IFFHS crown.

Football experts from 60 countries around the World took part in the voting organised by the IFFHS, the third year of its annual elections for women’s football.

The result did not come as a surprise as Wolfsburg dominated each competition it contested with an outstanding team which included the 2014 Goalkeeper of the Year in Almuth Schult and captain Nadine Kessler, who is the 2014 FIFA World Player, the 2014 UEFA Player and the 2014 IFFHS Playmaker.

The victory was even more convincing as the French team Olympique Lyon has been a standout performer in women’s football and has been in the world’s Top five for many years.

FC Kansas City, who came third, is the new USA Champion and had a highly successful season which was climaxed by winning the final against the favourite Seattle Reign.