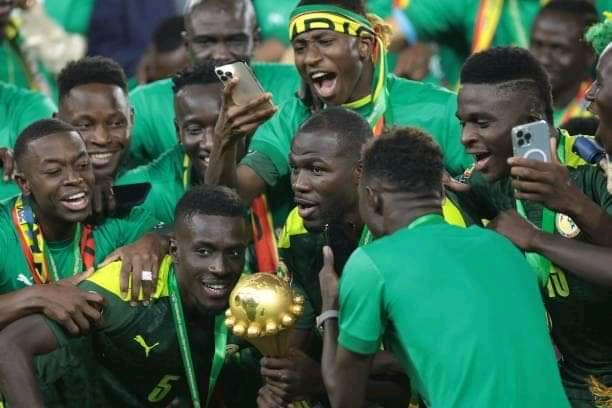 The Teranga Lions of Senegal lost in the 2002 final in Mali to Cameroon after a penalty shootout. In 2019, they lost to the Mediterranean Knights of Algeria, 0-1. When they arrived in Cameroon for the 2021 edition, they were vocal that they hoped the spirit of Cameroon’s first president, Ahmadou Ahidjo whose remains are buried in the Senegalese capital of Dakar would guide them to their premier victory in the dead man’s motherland. They played to a 0-0 tie with Egypt this Sunday, February 6, 2022 for 120 minutes, and only the penalty shootout designated them winners for the first time ever.

Liverpool striker, Sadio Mané lost a 4th minute penalty and then spent the entire game chasing a vindication for himself. But the more he worked for it, the more it was elusive as he lost almost half-a-dozen scoring chances in the course of the match. The man who stopped that penalty, Mohamed Gabal Ali was formidable and outstanding in his duties at the goal. And although he nursed a shoulder injury sustained earlier in the competition, his reflexes and commanding presence at goal routinely prevented the Senegalese from hitting target. No wonder he emerged mvp at the end of the day.

Team captain, Mohamed Salah was on duty managing the affairs of the Pharaohs with a sense of diligence and combativeness, and he and his teammates were able to stand their ground in the face of the incessant attacks from the Senegalese. They too had their moments of brilliance but goalkeeper Edouard Mendy managed the rear with commendable ability and resilience.

When it came to the shootout after 120 minutes of a 0-0 tie, the line between the victors and the victims was drawn on the sands of time. Kalidou Koulibaly, Abdou Diallo, Cheikh Dieng and Sadio Mané scored for Senegal, with keeper Gabaski stopping Bouna Sarr’s kick. Ahmed Sayed and Marwan Mehany scored for Egypt, as Mohamed Ahmed hit the woodwork while the goalkeeper prevented Ahmed Abdelmonem from scoring. The scores were 4/2 to the detriment of Egypt who had previously went through the same strenuous shootout exercise twice in the knockout stage. Tears of frustration in the faces of fans and players of Egypt contrasted with same of the Senegalese but for exactly the opposite reason, joy.

During the awards, Cameroon captain, Vincent Aboubakar got the golden boot with 8 goals to his credit; Edouard Mendy, the best keeper; best player, Sadio Mané. CAF and FIFA presidents, Patrice Motsepe and Gianni Infantino jointly carried the trophy to the presidential tribune where President Biya handed it over to Senegal captain, Kalidou Koulibaly.

The countdown to next year’s edition, TotalEnergies Africa Cup of Nations Ivory Coast 2023 is on with the CAF flag having been handed over to that country’s Sports Minister.