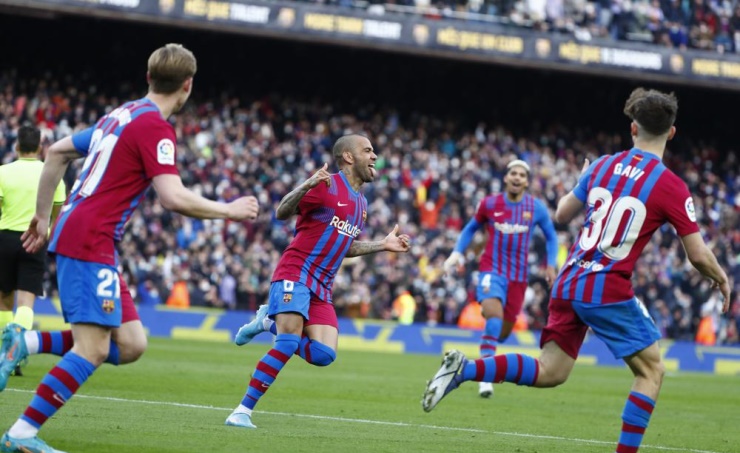 Dani Alves: assist, goal and red card at 1000th game!Having featured in the La Liga match Barcelona vs Atlético Madrid (4-2) on February 6, Dani Alves became the second footballer in the world to play 1000 top-level matches in XXI century. He concedes only to Cristiano Ronaldo (1103).It was a really eventful game for the Brazilian right-back: he assisted for one of Barcelona goals, then scored another by himself and finally received a red card!*Dani Alves became the first Barcelona player with 3 these actions (assist, goal, expulsion) in same game since Hristo Stoichkov who did it on 12 March 1994, also at the Camp Nou and also against Atlético Madrid (in addition, Stoichkov also missed a penalty).*In La Liga, the last case with a player to score, assist and be sent off in same game happened on 14 January 2019 (Mikel Merino from Real Sociedad against Espanyol).*Dani Alves whose age was 38 years 276 days also became Barcelona's oldest goal-scorer in all official competitions. He surpassed Joan Segarra who scored against Real Betis in La Liga season 1963-64 being 36 years 163 days old.*Dani Alves became the third oldest player to score against Atlético Madrid in the whole history of La Liga, after César (full name César Rodríguez Álvarez) who did it at 39 years 279 days in 1960 for Elche and Jorge Molina (39 years 244 days in 2021 for Granada).*Curiously, in the same game Atlético Madrid conceded 2nd “youngest” goal in their history in La Liga, from Barcelona’s talent Gavi whose age was 17 years 185 days. Only Raúl (Real Madrid, 1994) managed to score against “Colchoneros” being younger (17 years 131 days).*Comprising two last named facts, Barcelona became the first team in the history of La Liga with so big span in ages of two their players scoring in same game (21 years 91 days).