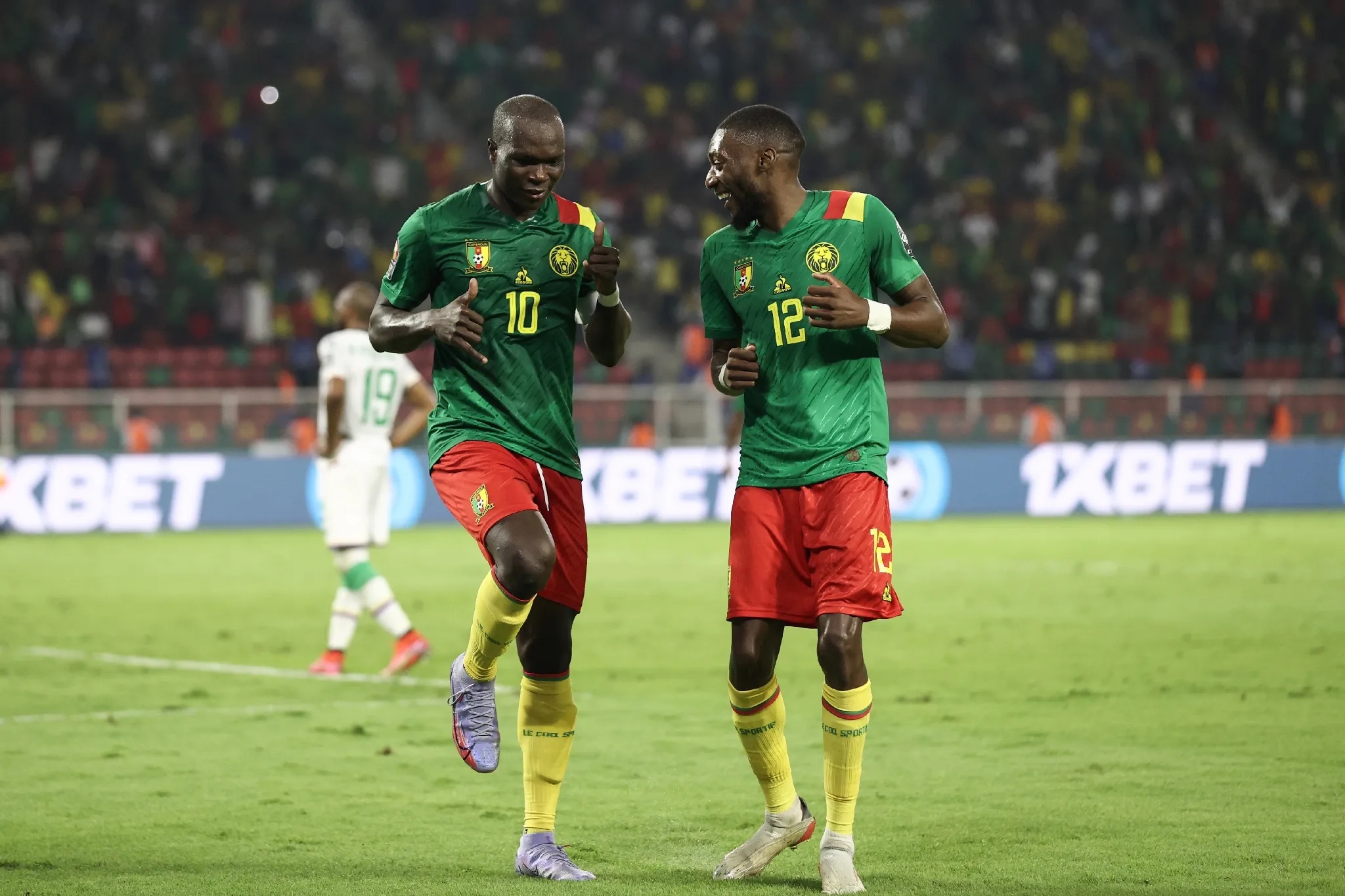 Picture : Vincent Aboubakar and Karl Toko Ekambi, the scorers of Cameroon and also the best scorers in the AFCON 2021 !

Before the two round of 16 games this Monday, the two debutants, Gambia and Comoros Islands were still in contention. But at the end of the day, Gambia went through while Comoros fell in the battlefield arms in hand. Before the battle for Olembe, Comoros Islands had lost at least 6 key players including their all regular goalkeepers as well as the main coach to covid, and so had only an outfield player, Chaker Alhadhur at goal. They further failed to convince CAF to delay the game for five days as the rules say a team with 11 players is fit to compete. With those handicaps, they took to the field in front of more than 55, 000 ready to fan the hosts to victory. But no sooner had the match begun than were their woes rendered completely irreversible when Ethiopian referee Bamlaku Tessema  showed their captain Nadjim Abdou a red card on 6 minutes. Attempts at each other’s vital zone sparred until the 29th minute when a triple combination upfront gave Cameroon the opener courtesy of Karl Toko Ekambi. Tactical substitutions in the Cameroon half did not quite project them a better side until captain Vincent Aboubakar scored his sixth goal in the tournament with a cajoling footwork technique in the 70th minute. Comoros did not relent as their resilience was demonstrated in several incursions upfront with only the particularly performing keeper André Onana to deny them moments of celebrations. But then, Youssouf Mchangama’s 35-metre projectile from a free kick caught the Cameroon keeper off guard. The scoreboard read 2-1, and the timer, 81 minutes. As their scorer emerged the most valuable player, the team leave the competition a combination of revelation, defiance and potential.

In an earlier game at Kouekong, certainly, the ineligibility of Naby Keita in the Guinean ranks for the 8th final date with Gambia, for he had tallied two yellow cards, was going to be felt by his teammates as they caved in before the opponents 1-0. The scorer of the 71st minute goal, Moussa Barrow first rattled the Guinean defense in the 10th minute when his marathon drive was stopped by the keeper with difficulty. The first real opportunity in the game was credited the Guineans in the 38th minute but Mohamed Bayo failed to make capital of the glittering chance. Gambian attempt in the 45th minute failed to yield dividends as Ebrima Darboe’s effort barely skirted the woodwork. Finally, Moussa Barrow got the job done on 71 minutes as he outsmarted his markers from the edge of the box to flick the ball with the  left foot past the advancing keeper. An attempt by the Guineans to draw level was nullified as their goal, 4 minutes later, was tainted with offside irregularity. Gambia lost Youssoufa Njie to a second yellow card on 87 minutes with Guinea suffering the same red card fate through Ibrahima Conte just before fulltime. But just before the Guinean behavioral slipup, a fantastic miss to obtain the equalizer was credited goalkeeper Jose whose catlike dive saw him parry the ball that subsequently got a rebound from the woodwork. The scorer, Moussa Barrow emerged the most valuable player as the Scorpions of Gambia stung one more opponent on their way to the final game.

This Tuesday, two matches are on schedule: Mali vs Equatorial Guinea at the Mfandena at 5 p.m. and Senegal vs Cape Verde at Kouekong at 8 p.m.