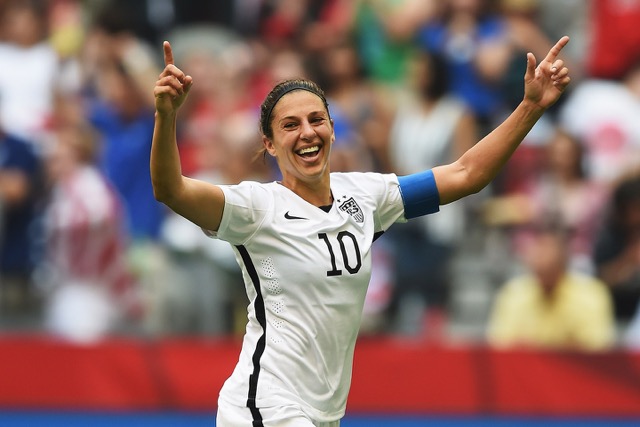 American Carli Lloyd has had a runaway 75 points victory to claim the title of the IFFHS World’s Best Woman Playmaker.

She dominated the 2015 year with an outstanding World Cup performance in Canada with the USA team and also had a  good season with Houston Dash in the NWSL.

World Champion, Golden Ball, hat trick in the final and the Goal of the Year enabled Lloyd to total 125 votes, leaving her nearest rival  Lena Goessling (Wolfsburg) trailing on 50 votes with Brasil’s Marta third on 38.

Goessling had previously won the Award in 2013 and repeated her second place finish of last year while five times FIFA World Player Marta, who received her first award in this category in 2012, completed a brilliant podium.

Nadine Kessler, the FIFA World Player 2014 and winner 2014 of TheWorld’s best Woman Playmaker , could not play all the year because of a bad injury.

In other placings, Dzsenifer Marozsan, who won the European Champions League with Frankfurt, has been in the top eight since 2012 and came fourth while Japan’s Aya Miyama was fifth following her World Cup appearances.

Sixth placed French midfielder Amandine Henry, who was nominated N°2 in Europe by UEFA, had a great season with the French National team and with her club Olympique Lyon, which was unbeaten over 12 months in national and international matches.

It is also the reason why Louisa Necib and Camille Abily, also from Lyon, took the next two places after Henry, because the three women made up the best  club midfield in the world.