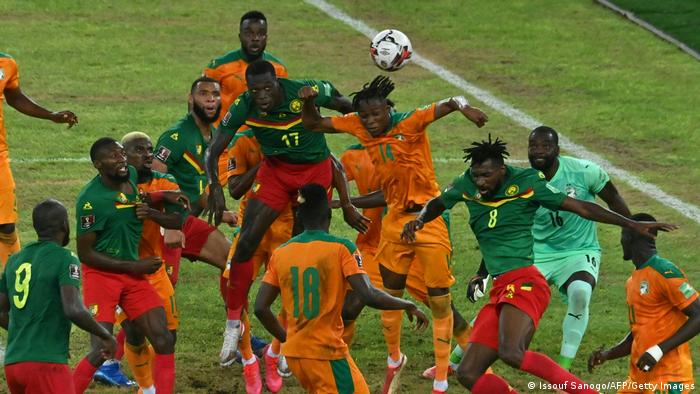 Picture : a real battle between Cameroon and Ivory Coast ! Ivory Coast is out for the playoffs !

Remaining 4 qualified teams for CAF Qatar playoffs to be known

This follows a day of unproductive results last Monday after four games of the qualifiers were played. So far, six teams, Senegal, Morocco, Mali, Ghana, DR Congo and Egypt are already working against those play-offs scheduled for March 2022. The remaining 4 will be known when Day-6 of Round-2 wraps off this Tuesday with crucial games.

Group-A laughing stocks, Djibouti leave this round of the qualifiers without a single point. Rather, they conceded 7 goals against Niger at Stade Général Seyni Kountche this  Monday. Victorien Adebayor has emerged the highest scorer in the history of the Niger national team with his hat trick scored on 14, 36, and 75 minutes, respectively. His teammate and forward player, Issa Djibrilla occupied the second spot on the game’s honors roll with his brace on 86 and 87 minutes, respectively. Two other scorers for Niger were midfielder, Mohamed Wonkoye on 62 minutes, and forward, Daniel Sosah on 64 minutes. Djibouti scored twice through midfielder, Daoud Ahmed and defender, Siad Isman on 85 minutes. Before the clash of the titans this Tuesday between Algeria and Burkina Faso, Group-A stands at Algeria on 13pts, Burkina Faso 11pts, Niger 7pts and Djibouti 0pt.

Group-E closes the qualifiers with Mali on 16pts, Uganda 9pts, Kenya 6pts and Rwanda 1pt. This follows the last group game this Monday in which Kenya defeated  Rwanda 2-1 at the Nyayo National Stadium. Forward, Michael Olunga connected a header into the net on 3 minutes. Midfielder, Richard Odada transformed a penalty on 15 minutes after the keeper had pulled down the opponent attacker. Midfielder, Olivier Niyonzima connected an indirect free kick for the lone Rwanda goal on 65 minutes.

Group-H has closed with Senegal on top with 16pts, Togo 8pts, Namibia 5pts and Congo 3pts. This follows the last group game this Monday in which Namibia hosted and lost to Togo at the Orlando Stadium 1-0. Forward, Euloge Fessou Placca scored his third goal in the qualifiers when he overpowered the shackles of two markers to find the net on 88 minutes; Namibia had earlier lost a penalty on 33 minutes.

The teams and the respective groups they won are as follows: Algeria(A), Tunisia(B), Nigeria(C), Cameroon(D), Mali(E), Egypt(F), Ghana(G), Senegal(H), Morocco(I) and Democratic Republic of Congo(J). From the latest FIFA rankings, the teams would be drawn according to the set up:  Pot 1: Senegal, Tunisia, Algeria, Morocco, Nigeria; and pot 2: Egypt, Ghana, Mali, DR Congo, Cameroon. However, while it awaited when the ten teams will be drawn into 5 fixtures  for the March 2022 play-offs on a home-and-away basis to select 5 Africa representatives for the Qatar 2022 World Cup Finals, FIFA has announced a probe into a protest tabled by South Africa after their last game with Ghana.

Getting into the Group-G qualifier at the Cape Coast Stadium on Sunday, South Africa were ahead of Ghana with 3pts, but with an inferior goal difference had they to lose and be caught up with by the hosts. Ghana did win 1-0, courtesy of a 33rd  minute penalty scored by André Ayew. But the South Africans maintained that Senegalese referee, Maguette N’diaye overrated the severity of the foul of Rushine de Reuck on Daniel Amartey who claimed to have been pulled to the ground when the corner kick was taken. Rushine by the way received a yellow card for the controversial offense which could neither be confirmed nor ruled out in the absence of the VAR.