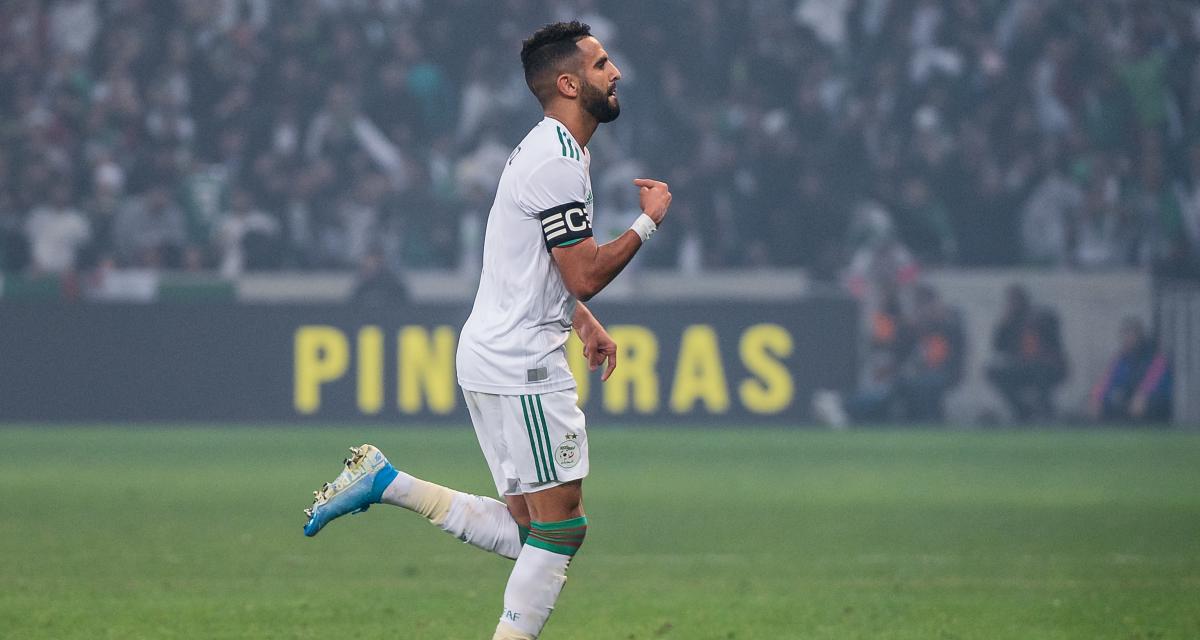 Picture : Riyad Mahrez was chosen yesterday in the World's Top 30 by the BALLON D'OR and registered a brace with Algeria !

Algeria hit the greatest number of goals in the CAF Qatar Day 3 Round 2 matches when they spanked Niger 6-1 in Blida last night.The  goals galore opened at Stade Mustapha Tchaker, Blida at the 27th minute with the first of two goals scored by forward, Riyad Mahrez. Midfielder, Soufiane Feghouli made it 2-0 on 47 minutes. The wake up call invited Niger to action when forward, Daniel Sosah reduced tally on 50 minutes. But then, Mahrez registered a brace on the night with a penalty transformed on 60 minutes. Algeria pressure on Niger was so overwhelming, pushing  Zakariya Souleymane to score an own-goal on 70 minutes. The sixth goal to Algeria credit was on 88 minutes through forward,  Islam Slimani to put full time scores at 6-1. The other Group-A match was played earlier on at Stade de Marrakech where Djibouti, receiving Burkina Faso on neutral ground were trounced 0-4. Forward, Abdoul Tapsoba got the first goal one minute into the stoppage time of the first half, before making it a brace to his credit when he scored again on 48 minutes. Defender, Issa Kabore scored the third for his side on 50 minutes. The fourth and final goal was credited forward,  Mohamed Konate. After matchday 3, Group-A shows Algeria 7pts, Burkina Faso 7pts, Niger 3pts and Djibouti 0pt.

In Group-D, the chase continued with Cameroon and Ivory Coast scoring three goals each. But Ivory Coast had the bonus for not conceding a goal when they paid Malawi a punitive visit, smashing the hosts on the neutral venue of the Orlando Stadium, Soweto,  3-0. Vigilant midfielder, Max-Alain Gradel surged to a miscalculation by the defender to thunder in the opener on 35 minutes. Another midfielder,  Ibrahim Sangare, well served by Gervinho cut in with a powerful drive to the far angle on 85 minutes. Still from the midfield, Jeremi Boga stifled two defenders to find the net from the edge of the area five minutes into stoppage time of the second half. In the second Group-D match of the day, Cameroon overpowered visiting Mozambique at the Japoma Sports Stadium, 3-1. Bayern Munich's forward,  Eric Maxime Choupo-Moting got a brace with two headers on the 28th and 51st minutes. Karl Toko Ekambi broke a 2-year jinx in the colors of the squad when he headed in the third goal on 63 minutes. Mozambique, however, made capital of one of their several surges upfront to find the net on 80 minutes through Cipriano Catamo. Group-D, after matchday 3 stands at, Ivory Coast 7pts, Cameroon  6pts, Malawi 3pts and Mozambique 1pt.

In Group-F, Egypt found their rhythm to get to the first spot with a 1-0 victory over Libya. The lone goal at the Borg El Arab Stadium, Alexandria was credited forward player, Omar Marmoush on 49 minutes. The second group game pitted Angola at base against Gabon at the Estadio 11 de Novembro. The hosts opened the accounts book in their 3-1 victory at the 25th minute through midfielder, Ambrosini Antonio Cabaca. Again,  midfielder, Ary Papel increased tally on 56 minutes.  Gabon replicated on 83 minutes through forward, Axel Meye. But defender,  Jonathan Buatu finally silenced them with a third goal one minute into stoppage time of the game.  The group, after matchday 3 shows Egypt 7pts, Libya 6pts, Angola 3pts and Gabon 1pt.

*Belgium have lost a competitive match after reaching halftime with a 2+ goal lead (2-3 vs France in League Nations semifinal) for the first time in their 117-year history. In friendlies it had only happened once (from 2-0 to 2-4 against Republic of Ireland, in Liège, on February 12, 1928).Besides that, Belgium has missed a 2+ goal lead at halftime in a competitive match for the first time since September 23, 1953 (2-0 to 2-2 against Finland in Brussels).

Lukaku's new international goal was not enough to lead Belgium in the Final.