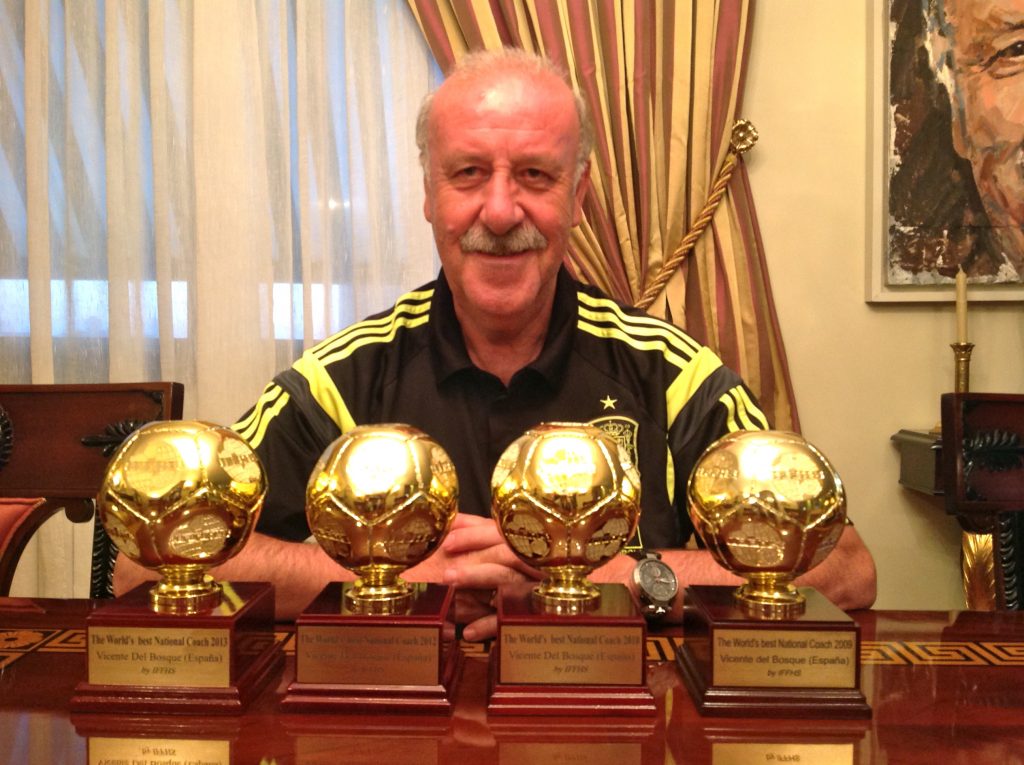 Vicente DEL BOSQUE, born on 23 December 1950 in Salamanca, is a Spanish international player and one of the greatest coaches of the World. He hold the record of IFFHS Awards (5 trophies as Coach) !

After his player career, Del Bosque continued to serve his club Real Madrid CF. So, he managed Castilla the youth team of the club, then he replaced for a couple of months in 1994 for the first time the coach of the great team of Real. He made the same in 1996 for two games, while he was always the youth team coach before that the club decided to give him in november 1999 the full time job as manager of Real Madrid.

He took then the way of Besiktas in Turkey for one season (2004/05), before coming back to Madrid, his city. In 2008, he took over the Spanish National team after the European success at the UEFA Euro. Vicente Del Bosque realised then another successful spell from 2008 to 2016. He leaded the national team to win their first-ever FIFA World Cup in 2010 and retained their European UEFA Championship in 2012, being runner-up of the FIFA Confederations Cup 2013. In this period from 2008 to 2013, Vicente Del Bosque was honoured by IFFHS as THE BEST NATIONAL COACH 2009, 2010, 2012 and 2013 ! After the Euro 2016, he announced his retirement of the management and of the Sport.

Spanish King Juan Carlos named him 1st Marquess of del Bosque, a personal nobility honour. Vicente Del Bosque is regarded as one of the greatest and most successful managers of all time, he is at this date the only football manager to have won the CLUB CHAMPIONS LEAGUE, the EUROPEAN CHAMPIONSHIP, the FIFA WORLD CUP and the CLUB INTERCONTINENTAL CUP !