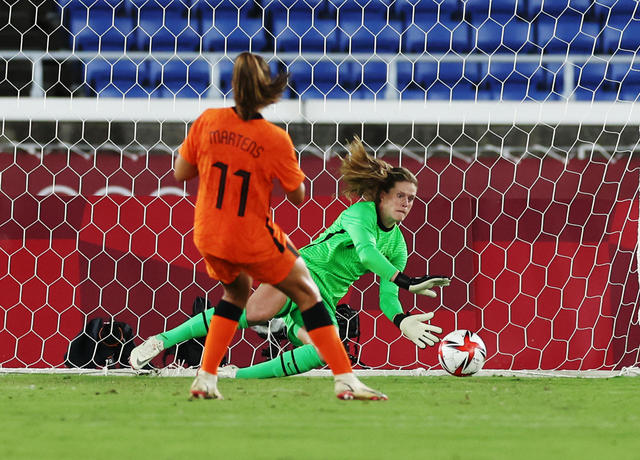 Picture : Alyssa Naeher was the US Matchwinner !

It was the day of the Goalkeepers today at the Olympic Women Quarter Finals ! Teegan Micah (Australia), Stephanie Labbe (Canada) and Alyssa Naeher (USA) stopped important penalties today and leaded their teams to the semi finals ! Particularly Alyssa Naeher was brilliant, saving a penalty in the last ten minutes of normal time and did so twice in the shoot-out !

Canada will play their third consecutive Olympic semi final, USA will try to win their fifth olympic title in 7 participations, Australia counted on Samantha Kerr and teenager Mary Fowler to beat Great Britain despite of Ellen White’s treble , Sweden proved too strong quick and athletic for Japan. With 4 wins in 4 games, Sweden is really the favorite of the Tournament.

In total, the Netherlands have scored 23 goals at Tokyo 2020, the most scored by any team at an Olympics. The previous single-tournament high was 16 goals, set by the USA during its run to gold at the 2012 Olympics in London.

Vivianne Miedema’s 10 goals are an Olympic record for the most goals scored by any player in a single Olympics, breaking the record of six previously held by Canada’s Christine Sinclair for her performance at London 2012. Her four-goal effort also tied the Olympic single-game scoring record, matching Germany’s Birgit Prinz, who scored four goals against China during the 2004 Olympics.