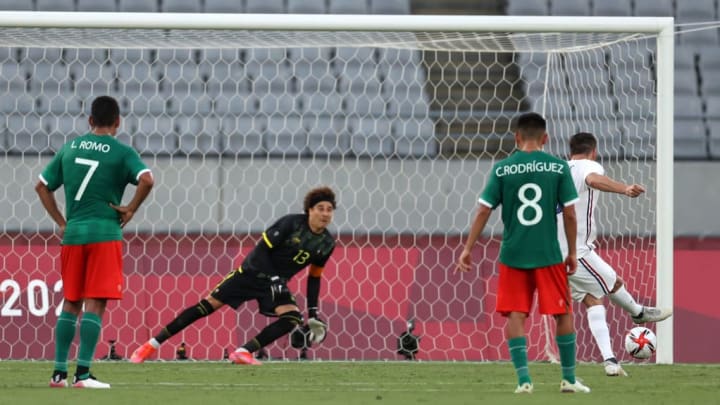 Picture : Gignac against Ochoa - the penalty

-       Guillermo Ochoa, 36 years old, is the captain of Mexico’s National team (114 international caps since 2005) and also of Mexico’s Olympic Team 2020 in Japan ! With Diego Lainez, he led his team to a large victory for the opening match against France.

-       Pierre André Gignac, the French Goal Scorer of Tigres UANL since 2015 in the Mexican Liga MX, played as one of the 3 overage players with France in the Olympic game against … Mexico in Japan ! He scored one goal on penalty, but couldn’t avoid the defeat of his team.

-       Captain and Goalkeeper Mohamed El Shenawy, winner of the CAF Champions League with Al Ahly before some days, Olympic team of Egypt realized an impressive performance against favorite Spain. Pedri, Dani Olmo, Marco Ascencio, Pau Torres and Dani Ceballos (who was injured during the match) couldn’t lead Spain to the victory.

-       For their first appearance in the Olympic Games since 2008 in China, Cote Ivoire team won their first match due to a goal of Franck Kessie (Milan AC) against Saudi Arabia, who is present for the first time at Olympic Games in the XXIth Century (last in 1996).

-       Brazil with captain Dani Alves will keep his Olympic title after their victory in 2016. Third in 2008, second in 2012, Olympic Gold in 2016 : Brazil likes Olympic games. First match, first victory against Germany and a hat-trick for Richarlison !

-       Real Madrid’s forward Takefusa Kubo earned Japan the win over South Africa in the opening match of the Olympics group with an individual brilliance. For his first olympic match, kubo was impressive.

-      Australia won his first match in HISTORY of the Olympics against Argentina ! Never the Australian players have made such an impressive performance !