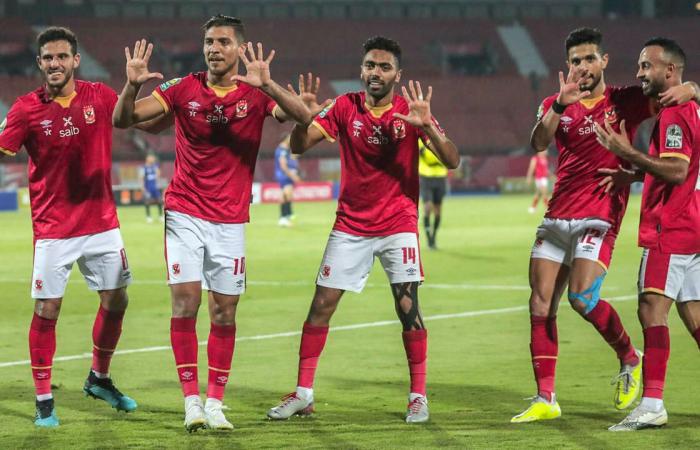 Defending Africa Champions League holders, Al Ahly Sporting Club of Cairo, Egypt have easily retained the same trophy they won last year, trouncing Kaiser Chiefs of Naturena, South Africa 3-0 at the Stade Mohamed V in Casablanca Morocco last night. They thus become the first side to be crowned champions a historic tenth time of the tournament first won by Cameroon’s Oryx, Douala in 1965. Then it was called the Africa Champions Club Cup. Ahly were making a record 14th appearance in the final of the tournament; and last night’s victory made their South African coach, Pitso Mosimane only the second man to win the trophy back-to-back after Portuguese trainer, Manuel Jose in 2005 and 2006.

Back to last night’s scene of action, the highly favoured Ahly proved too strong for the Chiefs as they permanently kept the danger inside the latter’s half and area as against the first lone pushback registered on 16 minutes with their attempt at keeper Mohamed El Shenawy’s goal. The odds firmly rallied against the Chiefs when Happy Mashiane took a second yellow card and was thus shown red moments before the half with the VAR validating the Burundian referee’s decision. Resumption spelt havoc for South African dreams to win their second-ever international crown, having last won the extinct African Cup Winners trophy two decades ago.  Mohamed Sherif  sped on to a through ball on 53 minutes to raise the curtains with a right foot chip. Mohamed Magdy got the second on 64 minutes after lifting a pass from Mohamed Taher out of the keeper’s reach. And the third that came in on 74 minutes was a conclusion by  Amir Al-Sulaya following a cajoling back heel from Mohamed Sherif just inside the box. Amir would later be voted most valuable player at the final.

With that victory, Al Ahly will now take on Morocco’s Raja of Casablanca for the Africa Super Cup well ahead of their second consecutive Club World Cup where they hope to improve on their performance in the 2020 edition when they defeated Palmeiras of Brazil before losing in the semifinals to Bayern München of Germany.

An extraordinary general assembly of the Cameroon Football federation has adopted its amended texts and statutes that would define the road ahead that would lead to the election of its next executive bureau to replace the current interim one put in place by a joint decision by FIFA and CAF. But then, reasons are legion to suggest same would be  heavily disputed by dissatisfied parties.

The Court of Arbitration for Sport, CAS had ruled in January 2018 to annul its General Assembly and the elected bureau then headed by Mbombo Njoya. In response to what next, CAS hinted at the competence of CAF, who, turning to FIFA decided that the bureau in place, headed by Njoya should ensure ‘continuity of service’. Amid the discontent and ensuing challenge put up by opposing factions, and the political resolve by the powers that be for the country to skirt any potential forfeiture to host next year’s Africa Cup of Nations, should FIFA stand not be respected, Njoya’s bureau was allowed to organize yesterday’s Extraordinary General Assembly.

The clearly illegal assembly held with an overwhelming quorum, including the federation honorary presidents, former presidents, and representatives for the National Olympic and Sports Committee and the Sports Ministry, as well as virtual participants from FIFA and CAF. Those eligible to vote adopted the new texts and statutes that included the creation of a new professional football league, reduction of the number of regional delegates to the general assembly, subsequent increase in the number of female participants in the general assembly, amongst others.

Critics foresee yet another trip to CAS to challenge the legitimacy of yesterday’s extra-ordinary general assembly and all its resolutions and subsequent decisions as soon as Cameroon host the CAF TotalEnergies Africa Cup of Nations from January 9 to February 6, 2022.