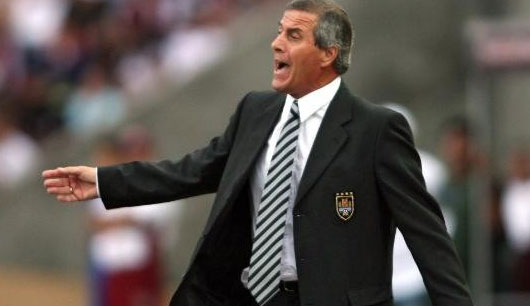 Oscar Washington Tabarez Silva, born 3 March 1947 in Montevideo, is the current Manager of the Uruguay National Team since 2006 and one of the greatest coaches in the World Football, being crowned South American Coach of the Year 2010 and 2011, and particularly THE WORLD’S BEST NATIONAL COACH 2011 by IFFHS !

Tabarez made a 12 year senior playing career from 1967 to 1979, signing with modest clubs in Uruguay, Argentina, Mexico. He played 216 games as defender (4 goals) during these years and retired at age 32. He worked as primary school teacher, but one year after his retirement, in 1980, he took in charge as coach CA Bella Vista in Uruguay and began an extensive coaching career for near 40 years ! In 1983, he was also named manager of the Uruguay U20 Team and won the Gold Medal of the Pan American Games in Caracas !

Tabarez worked for various clubs in Uruguay (Danubio, Montevideo Wanderers), before leading Penarol to the winning of the Copa Libertadores in 1987. Known as EL MAESTRO (The Teacher), he managed a first time the Uruguay National Team from 1988 to 1990. In 1991, he signed in Argentina at Boca Juniors and won the Primera Division 1992 Apertura and the Supercopa Masters 1992. Tabarez joined then Italy with stays in Cagliari (1994-96) and Milan (1996). Without success, he went to Spain to Oviedo (1997/98) before coming back to Cagliari (1998/99). After new challenges in Velez Sarsfield (2001) and Boca Juniors (2002), he spent four years away from football and returned to the job of Manager of the Uruguay National Team in 2006 until now !

Oscar Tabarez is presently the first on the list of the World Football National team Managers with the most games. In 2016, he surpassed the record of German Sepp Herberger (167 matches) and has 212 matches in his Managerial career (106 victories, 51 draws). He is the Recordman for the National Teams. He became in 2012 the Order of Merit , the highest honour awards by FIFA.