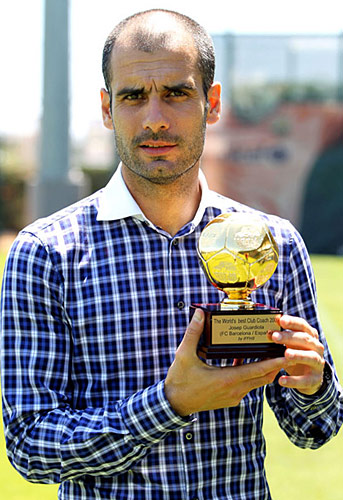 Josep “Pep” Guardiola “Sala” , born 18 January 1971 in Santpedor, is the Spanish current manager of FC Manchester City and is considered a one of the best managers in the Football History, after being a great international player.

After his retirement as player, Guardiola took in charge as coach the B-Team of FC Barcelona one season 2007/08. He won the Tercera Division title and was nominated to manage the first team of the club in 2008 ! He became the youngest manager to win the treble in his first year (La Liga, Copa del Rey and particularly the UEFA Champions League 2008/09 ) ! He was crowned as THE WORLD’S BEST CLUB COACH 2009 by IFFHS, winning also in 2009 the UEFA SuperCup and the FIFA Club World Cup title.

In 2010, he won again the Spanish La Liga title and the Supercopa de Espana before making a new fantastic season in 2010/11. He won again the UEFA Champions League, the Spanish La Liga title, the Supercopa de Espana, the UEFA Super Cup and the FIFA Club World Cup ! He was again nominated as THE WORLD’S BEST CLUB COACH 2011 by IFFHS and THE FIFA World Coach of the Year. In his fourth and last season in Barcelona, he won the Copa del Rey 2011/12 and ended with 14 Trophies in 4 years with the FC Barcelona ! A club record !

After a sabbatical period, Pep Guardiola signed in Germany at FC Bayern München, where he succeeded to Jupp Heynckes, winner of the treble (Bundesliga, German Cup, UEFA Champions League) in 2013. He brought his attractive football to Germany and won in 3 seasons 3 Bundesliga titles (2013/14, 2014/15, 2015/16), 2 DFB Cups (2013/14, 2015/16), one UEFA Super Cup 2013 and the FIFA Club World Cup 2013 ! He failed only in his quest to win the Champions League. After three years in Germany, he joined England and the Premier League to FC Manchester City.