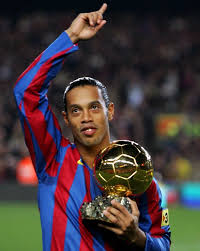 He is a Brazilian former professional and ambassador for Barcelona. He played mostly as an attacking midfielder, but was also deployed as a forward or a winger. He played the bulk of his career at European clubs Paris Saint-Germain, Barcelona, and A.C. Milan as well as playing for theBrazilian national team. Often considered one of the best players of his generation and regarded by many as one of the greatest of all time, Ronaldinho won two FIFA World Player of the Year awards and a Ballon d'Or. He was renowned for his technical skills and creativity; due to his agility, pace, and dribbling ability, as well as his use of tricks feints, overhead kicks, no-look passes and accuracy from free-kicks Ronaldinho made his career debut for Grêmio, in 1998. At age 20, he moved to Paris Saint-Germain in France before signing for Barcelona in 2003. In his second season with Barcelona, he won his first FIFA World Player of the Year award, as Barcelona won La Liga. The season that followed is considered one of the best in his career as he was instrumental in Barcelona winning the UEFA Champions League, their first in fourteen years, as well as another La Liga title, giving Ronaldinho his first career double. After scoring two spectacular solo goals in El Clásico, Ronaldinho became the second Barcelona player, after Diego Maradona in 1983, to receive a standing ovation fromReal Madrid fans at the Santiago Bernabéu. Ronaldinho also received his second FIFA World Player of the Year award, as well as the Ballon d'Or. Following a second-place La Liga finish to rivals Real Madrid in the 2006–07 season and an injury plagued 2007–08 season, Ronaldinho departed Barcelona to join Milan. He then returned to Brazil to play For Flamengo in 2011 and Atlético Mineiro a year later where he won the Copa Libertadores, before moving to Mexico to play for Querétaro and then back to Brazil to play for Fluminense in 2015. Ronaldinho accumulated numerous other individual awards in his career. He was included in the UEFA Team of the Year and the FIFA World XI three times, named UEFA Club Footballer of the Year in 2006 and the South American Footballer of the Year in 2013, and was named in The FIFA 100, a list of the world's greatest living players compiled by Pelé. At international level, Ronaldinho played 97 matches for the Brazil national team, scoring 33 goals and representing his country in two FIFA World Cups. He was an integral part of the 2002 FIFA World Cup-winning team in Korea and Japan, starring alongside Ronaldo and Rivaldo in an attacking trio, scoring two goals, including a free-kick from 40 yards out against England, registering two assists and being named in the FIFA World Cup All-Star Team. As captain, he led Brazil to their second Confederations Cup title in 2005 and was named Man of the Match final. Ronaldinho scored three goals in the tournament, taking his total to nine, making him the competition's joint all-time leading goalscorer. 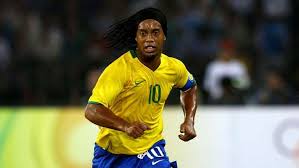 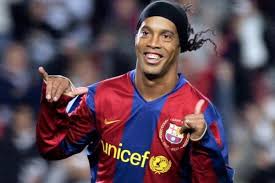 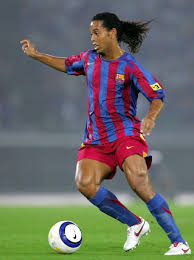 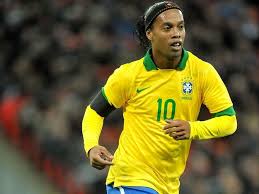