He is an Italian former professional footballer. Pirlo was usually deployed as a deep-lying playmaker in midfield for both his club and national teams and he is widely regarded as one of the greatest ever exponents of this position due to his vision, ball control, technique, creativity and passing ability, as well as for being a free-kick specialist. Pirlo began his club career as an attacking midfielder with his hometown club Brescia, whom he helped win a Serie B title and subsequent promotion to Serie A in 1997. His promising performances led to a move to Inter Milan in 1998, but he struggled to gain playing time at his new club, and was sent on loan in 1999. Despite successful spells with Reggina and a return to Brescia, Pirlo was still unable to break into Inter's starting line-up and was sold to cross-city rivals A.C. Milan in 2001. At Milan, manager Carlo Ancelotti decided to transition Pirlo into a deep-lying playmaker to orchestrate the team's attacks. Pirlo excelled in his new role and soon developed into a world-class midfielder, and won a plethora of trophies, including two UEFA Champions Leagues, two UEFA Super Cups, two Serie A titles, a FIFA Club World Cup, a Supercoppa Italiana, and a Coppa Italia. After joining Juventus on a free transfer in 2011, who had gone trophyless since 2003, he added four more Serie A titles, which he won consecutively, as well as two Supercoppa Italiana titles, and a Coppa Italia. After playing in Italy for over 20 seasons, Pirlo joined Major League Soccer franchise New York City in 2015, helping the team to reach the playoffs in his second and third seasons before retiring in 2017. At international level, Pirlo is the fifth-most capped player in the history of the Italian national team with 116 caps between 2002 and 2015. He played for the Italian youth teams at U15, U18 and, U21 level, captaining and leading the latter to victory in the 2000 UEFA European Under-21 Championship as the Golden Player and Top Scorer of the tournament. He joined the Italian senior team in September 2002 and captained the Olympic team to a bronze medal in the 2004 Olympics. Later, he was instrumental in the senior team's victory in the 2006 FIFA World Cup. He was named Man of the Match three times, including the final, more than any other player in the tournament, and ultimately won the Bronze Ball (awarded to the third best player of the tournament) also being elected to the Team of the Tournament. He was also elected as part of the UEFA Euro 2012 Team of the Tournament after leading Italy to the final, winning three Man of the Match awards in the process, the most of any player along with Andrés Iniesta. He has also represented the Italian senior team at the 2004 and 2008 UEFA European Championships, the 2010 and 2014 FIFA World Cups and the 2009 and 2013 FIFA Confederations Cups, finishing third in the latter edition in Brazil, where he was also elected to the Team of the Tournament. Pirlo came in third, second, fourth and third twice more in the International Federation of Football History Statistics World Playmaker of the Year awards in 2006, 2007, 2012, 2013 and 2015, respectively. He placed fourth in the 2012 UEFA Best Player in Europe Award and seventh in the 2015 edition. He placed seventh in the 2007 FIFA World Player, fifth in the 2007 Ballon d'Or and seventh in the 2012 FIFA Ballon d'Or award. He was also named as part of the 2006 FIFPro World XI and the 2012 UEFA Team of the Year. In 2012, 2013 and 2014, Pirlo was also elected as Serie A Footballer of the Year and was also named as part of the Serie A team of the Year. After helping Juventus to the 2015 UEFA Champions League Final, he was named to the squad of the season. In 2012, Pirlo was named the eighth best footballer in the world by The Guardian. In 2013, Bloomberg ranked him the fifth best player in Europe. In 2015, France Football rated him as one of the 10 best footballers in the world who were over the age of 36. 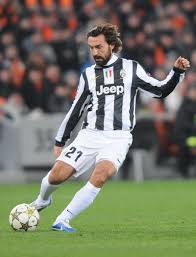 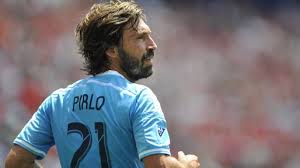 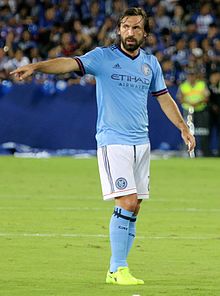 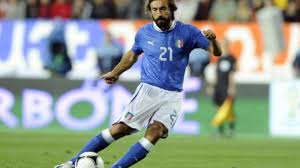